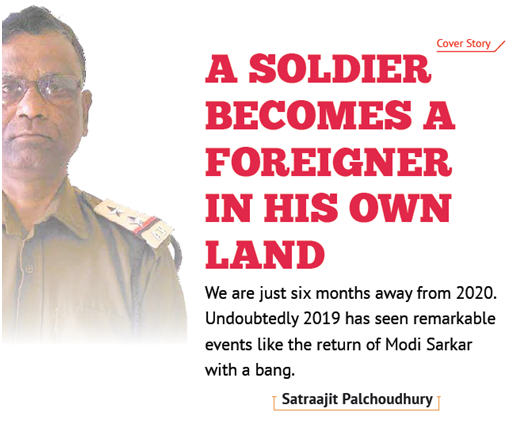 Once again 2019 has turned out to be a disastrous year for the beleaguered Gandhi scion as he failed to reach the three digit figure in the general elections—keeping aside these political cocktails, the dubbing of a retired Captain of Indian Army Mohammad Sannaullah as a D-Voter will continue to haunt the people of Assam in the years to come.

This is not only shameful but also a violation of human rights because the person in question is a Kargil war veteran and a soldier who has sacrificed his glorious young days for his motherland.

Sannaullah’s fate was sealed on May 23 by the Foreigner’s Tribunal (FT) of Boko and the very next day he was sent to a detention camp.

This incident has once again brought a bad name for Assam across the country. All the political parties have been doing politics over the issue of D-Voters—unfortunately till now no government has been able to come up with a permanent solution to this age-old problem.

His cousin, a retired Junior Commissioned Officer (JCO) Ajmal Haq has trained his guns on Assam Border Police Organisation (ABPO) alleging that Sanaullah has been falsely implicated in this case.

“After serving the nation for 30 long years my brother has finally got the recognition from the state. He is now being considered as a foreigner—rather an illegal infiltrator in his own land,” Haq stated.

At this moment the man on the line of fire is the former sub-inspector with ABPO Chandramal Das. A first information report (FIR) has also been lodged with Boko police station against Das.

Instead of looking at these titbits, we now need to look at the larger issue. The ongoing National Register for Citizens (NRC) exercise in Assam seems to have failed to achieve the core objective of identification and deportation of illegal infiltrators who the indigenous communities in Assam believe have sneaked into their land.

Migration has an impact in the overall economy of a country. The western countries like Canada and the USA have reaped the benefits of migration.  But this is an alien concept in Northeast because here the entire politics revolves around identity and ethnicity. Sanaullah’s case has attracted the attention of mainstream national media because he was with Indian Army.

It’s a pity that names of Chandrani Paul, Madhubala Mandal are not in the reckoning because they are not carrying any tag. Both Chandrani and Madhubala are loitering in detention camps and the irony is nobody is seeing their tears.

There is nobody to heal their wounds. Sanaullah has been granted bail by Gauhati High Court but the other victims are not fortune’s favourite.

Of late, a declared foreigner by the name of Sona Munda breathed his last in Goalpara detention camp. When Munda was arrested he was a cancer patient but even this life threatening disease could not melt the ice—after languishing in the detention camp for more than 4 years, finally the poor man died the death of a foreigner in his own land.

The long and short of the tale is that ABPO often takes the call in a whimsical manner. Dear readers, by delving deep into the case of Sanaullah, you can understand everything on your own.

As per the statement of Sanaullah’s cousin, the suspected D-Voter (read as soldier) passed his school leaving board exam in 1967 and on May 21, 1987 he joined the Indian Army. He retired as a Lieutenant on May 31, 2017, Haq says.

“My brother is also a recipient of President Award. The ABPO first registered a case against him in 2008. At that point of time he was posted in Arunachal Pradesh. The FT served a notice to him on November 4 and asked him to appear before the tribunal in person,” tells Haq by adding, ‘though he submitted all the relevant documents, the FT chose to keep these documents aside and it straight away declared him to be a foreigner and the rest is history.’