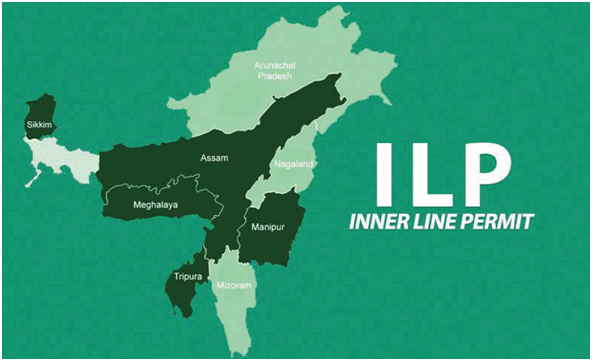 The inner line permit was created during the colonial rule of the British in 1873 in order to protect vulnerable tribal communities. It is essentially an official travel document issued by the Government of India to grant Indian citizens permission for inward travel into a protected area for a limited period of time. It is mandatory for Indian citizens residing outside these areas to seek approval prior to entering these regions. However, there might be a different set of rules for long term visitors, though they are not valid for central government employees and security forces.

Despite the fact that parts of the state of Meghalaya – the Khasi and the Jaintia hills – do fall under the jurisdiction of Bengal Eastern Frontier Regulation, it is the only other tribal majority state in the region beyond the purview of the inner line.

Indian Columnist and political commentator Sunanda Vashisht's speech has taken the social media by storm after she testified at the US Congressional hearing on Human Rights on November 14. Organised by Tom Lantos Human Rights Commission, a bipartisan US congressional caucus was held in Washington to examine the human rights situation in Jammu and Kashmir in the context of the region's history.

During her speech, Sunanda highlighted some of the crucial human rights situations in the Valley, India’s successful attempts to fight against insurgencies in J&K, milestones achieved post abrogation of article 370 and made several other important statements in the context of Kashmir's human rights violations over the years. The hearing also addressed the Valley's lockdown situation including restrictions on internet and communication.

I would like to thank the Tom Lantos human Rights Commission, for inviting me to testify here as the witness. Today is worth remembering, that this commission is named after the late Congress man Tom Lantos, a Hungarian born Holocaust survivor. In July 2003, he said, Indians & Jews share a passionate commitment to respect for others, for the rule of law and for the mindless, vicious, fanatic Islamic terrorism. Am also reminded today, of American Journalist Daniel pearl, who was kidnapped and beheaded by Pakistani terrorists. His last word, my father is a Jewish, My mother is Jewish and I am a Jewish. Honourable members of the Tom Lantos Commission, I speak before you, the last words of Daniel pearl in my own words, my father is a Kashmiri Hindu, my mother is a Kashmiri Hindu, I am a Kashmiri Hindu, and her home and lives were destroyed by radical Islamic terrorism. As I begin to speak, I am choked by the thought of those voices, I represent here, because their voices were extinguished in most brutal fashion. I am the member of the minority Hindu community from Kashmir, victim of the worst ethnic cleansing witnessed in the independent India. I speak here today, because, I am a survivor.