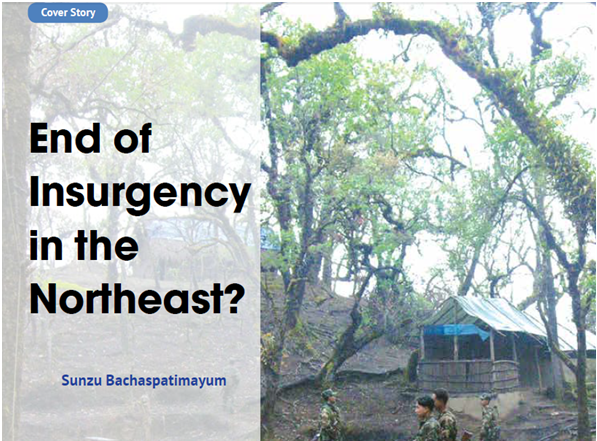 Northeast India’s insurgents are on the run in Myanmar, their last refuge, with Tatmadaw  (as the Myanmar army is called) launching intense offensive flush out operations in Taga area in  north-western Sagaing division on the eastern part of Chindwin river,  an area under the control of Khaplang faction of  the National Socialist Council of Nagalim or NSCN (K).

The Taga adjoins the border town of Moreh in Manipur and is about 60 kilometres away from Moreh.  The ground zero of the action is also known as the unified command area of the umbrella group called the United National Liberation Front of Western South-East Asia (UNLFWESE), founded under the aegis of the NSCN (K).

Soon after its establishment under the leadership of late veteran rebel leader, SS Kaplang, UNLFWESE asserted its presence by carrying out several strategic strikes against the Indian security forces. One of the most prominent attack of the group under the command of NSCN-K  was the Chandel attack on an Indian Army convoy that left 18 soldiers dead and many seriously injured.

Retaliation by the Indian Army came in the form of the Indian Army Special Forces launching a surgical strike on two NSCN(K) camps inside Myanmar. The Indian army claimed inflicting heavy casualties on the rebels. The Army's version was disputed by the rebels who  mocked the Special Forces by terming the ‘surgical attack' as a failed attempt to attack their camps and said that none of its cadres were injured.

Setting aside the controversy, post Chandel attack, one thing is certain - the government of India is determine to decimate the rebels, particularly the NSCN (K) by wooing the Myanmar government and the Tatmadaw.

At that time NSCN(K), which had signed a  ceasefire agreement in 2012 with the Sagaing regional government, had been sheltering Northeast Indian insurgent cadres in the unified command areas of Taga.

In 2014, immediately upon assuming power, the Modi government followed an appeasement policy while dealing with Myanmar, opening communication channel with the Myanmarese authorities, including the Tatmadaw with the objective of roping Myanmar to decimate the northeast rebels.

“The objective was to forge an understanding with the Myanmarese authorities and convince Tatmadaw that cracking down on Northeast rebels in their territory was in their long-term interests. We also made attractive offers of help, including monetary help to buy weapons, to them,” said a senior Bureaucrat of Ministry of Home Affairs (MHA).

“The Tatmadaw had little control over the Taga area, which were inhabited by the Nagas of Myanmar. It was the NSCN(K) whose undisputed writ ran in those areas. The Tatmadaw lacked resources, intelligence and the motivation to establish control over those areas.  Myanmar was more concerned with its own insurgent groups like the Kachin Independence Army. So we started working with the Tatmadaw and signed a protocol with it. Under this protocol, we provided specialised training to some groups of its soldiers in counter-insurgency operations, provided sophisticated arms and other equipment like night-vision glasses and hand-held thermal imagers to them. We also started providing them with real-time intelligence on the location of rebel camps and movement of rebel cadres. We started sharing satellite imagery with them. And we motivated them to launch operations to bring areas held by the NSCN(K) under its own control,” said an Eastern Command Officer of the Indian Army.

It was the Atal Bihari Vajpayee government that got the Royal Bhutan Army and the Sheikh Hasina government of Bangladesh to conduct flush out operation against the Northeast insurgents, who have set up camps in their respective countries since December 2003.

The Vajpayee government initiative had effectively broken the backbone of many prominent outfits operating in Assam and rest of the Northeast region including the United Liberation Front of Asom (ULFA) and many of their top cadres were arrested and handed over to India.

Soon after coming to power in 2014, the Modi government followed up on the Vajpayee initiative and started working closely with the Myanmar to deny safe havens in Myanmar that Northeast insurgents were enjoying, especially in Sagaing division. This diplomatic efforts resulted in the Indian Army and it’s Myanmar counterparts conducting coordinated operations to flush out rebel cadres from camps in Myanmar since early this year.