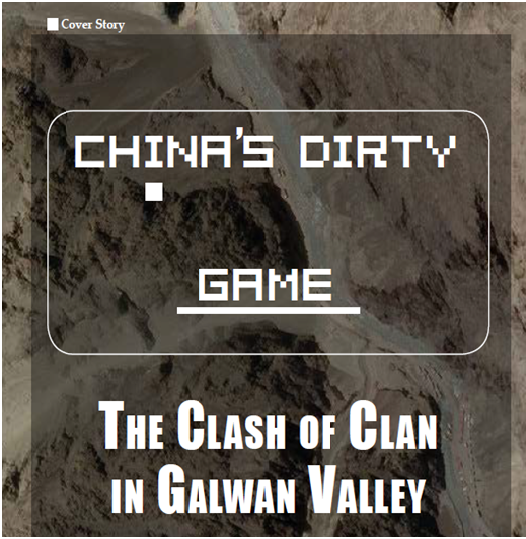 China continues to figure India now and then. But, its action on 15 June 2020 at Galwan Valley is what surprised the nation. The violent clash at Galwan Valley started between Indian troops and soldiers of the People’s Liberation Army (PLA) on the night of June 15, in which 20 soldiers from Indian side were martyrs, whereas they have also killed more than 41 soldiers of PLA. Though China from their side, never gave any figure of their casualties.

According to media reports, a team led by Colonel Santosh Babu of 16 Bihar Regiment set out to hold a discussion with the Chinese side on June 15 as PLA troops were not returning back to their territory as per their commitment. During the discussions, the Chinese PLA deliberately aggravated the situation and PLA soldiers attacked the Indian delegation with sticks, stones and post wrapped in barbed wire.

The Galwan Valley is a home of Galwan River which flows from the Aksai Chin (now under China) region of Ladakh of India. The river is named after Ghulam Rasood Galwan, a Ladakhi explorer of Kashmiri descent, who first explored the course of river. The length of the river is about 80 kms and it is a fast flowing river which is also known as “River of Sorrow”. The climate is harsh with difficult terrain and variation in topography.

China is notorious and is into dispute with almost all its neighbours. It is the world’s most populous country in the world and third largest in the area. It has the largest number of neighbours (14), sharing its 22000 kms of land borders namely: North Korea, Russia, Mongolia, Kazakhstan, Kyrgyzstan, Tajikistan, Afghanistan, Pakistan, India, Nepal, Bhutan, Myanmar, Laos and Vietnam. China’s policy of expansion of state like an organ is responsible for its dispute with all its neighbours. China has the biggest outstanding border issue with India. 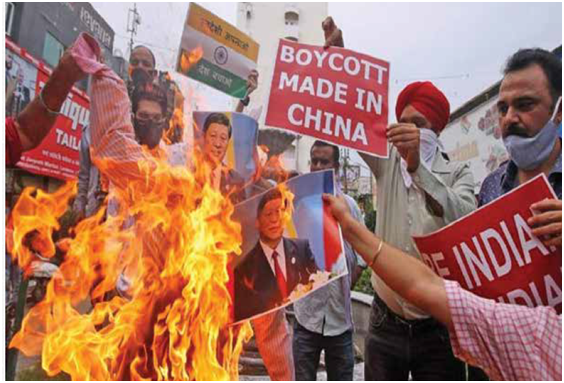 The seed of border dispute between India and China has a historical perspective. Full length details cannot be discussed here due to paucity of space. However, it will be relevant here to mention that in 1954, when relationship between India and China started to become strain due to border dispute and Chinese troop began to violate the North East Frontier of India (now called Arunachal Pradesh). Pandit Nehru wrote a letter in 1959 to the Chinese Prime Minister informing him that he has recognized the North-East boundary of India during his last visit to India (according to the White Paper on China published by Government of India in Page 43). In reply Chinese Prime Minister, refused to accept the McMohan Line, terming it as a bio-product of British Policy of aggression against Tibetan Region of China. Ever since, the dispute is going on. China’s war of 1962 was a blow to India. Before the war, India-China Bhai Bhai (Indian and Chinese are brothers) was the slogan given by China.

China believes in the policy of deception. In spite of the fact that Mr. Narendra Modi, Prime Minister of India visited China almost around 14 times to give a boost to diplomatic relationship, which it appears to have failed. It has kept border dispute with India alive, in spite of having a good volume of trade and commerce. With it, it has continued to build infrastructure in the borders and developed air-base at different strategic location. This includes additional construction activities at Nagari-Kunsha Airport – which is just 200 kms from Pangong Lake at an altitude of 1.4000 sq feet. NDTV reported that additional construction activities at this airport were seen and four Fighter Jets were spotted at the airport, which only indicates the dirty game plan of China. The process from Indian side was started a bit late. It has gained momentum since 2014 and the country is in a position to give a befitting reply to the PLA, if needs arise. The Prime Minister Mr. Narendra Modi, while addressing the all party meet, did give a hint that extreme sacrifices of Indian soldiers will not go in vain. The moral of the army is high and support level from the government is available efficiently.

The few lessons, we must learn from history.

v  British made us poor by exploiting us economically and then ruled our country for two centuries. All goods were produced in Britain and sold to India. The labours of Britain got job and Indians died of starvation.

v  China is exporting to India 5 lakh crore of goods every year, which includes toys, furnitures, electronic items, steel, pharmaceutical, chemicals etc. India export to China only 1 lakh crore of goods annually. Hence, the trade deficit is over 4 lakh crore annually. What does this indicate? It indicates that we are feeding the work force of China and depriving Indian Labours.

v  War should always be the last option. Both India and China are nuclear nation and once the war is started, the economy gets affected. Seriously, diplomatic talk must continue, India’s defence system must get its attention and investment as required.

v  The Atmanirbhar concept as proposed by Prime Minister must be our focal point for growth and development. We must encash the sentiments of the people of India to boycott Chinese goods. In fact, we must learn to say “NO” to all products of Made in China. It will hit them hard.

v  Many Indians have set up their industries in China. Government must prepare a policy framework, so that these industries start returning to India. It is tough but it must begin.

v  The reason why Indians set up industries in China and not in India, must be studied. To me, it is excesses of law that makes things expensive and survival difficult.

Till the time of writing of this article, India has increased technical drone surveillance of the area and also added more of the Indo-Tibetan Border Police Battalion into the sector to support army along the LAC.