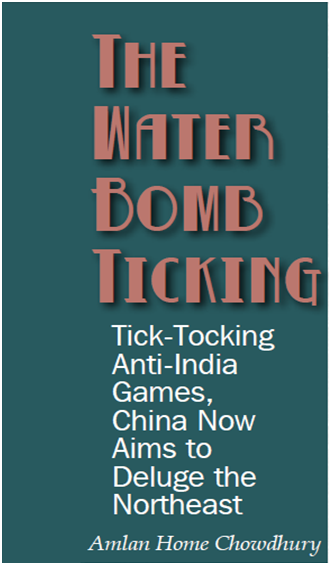 By constructing an artificial lake on the Yarlung Tsangpo River in Tibet just above Arunachal Pradesh, China has deliberately created fear of a potential “water bomb". If the lake is breached purposely, it can devastate the Siang Basin inundating vast areas in Northeast.

The artificial lake on the Yarlung Tsangpo River really can act as a powerful “Water Bomb”. After China’s recent misadventure at Galwan and constant sneaking in of the Peoples Liberation Army (PLA) in Arunachal Pradesh over the years, we need to fear this new kind of bomb.

Beijing May Trigger the Tibet River

The Communists, Urban Naxals and trigger happy terrorists of Northeast may consider the Red China as their ideal but the reality is Beijing may use any means to harm India including this artificial lake triggering its waters to flow downstream to deluge vast areas finally connecting with the Brahmaputra River.

Topographically, the Northeast is a part of the vast Tibet Plateau captured by China after ousting the Dalai Lama, the Supreme Spiritual Guru of Tibetan Buddhists. On looking at the river system of Northeast, we find it is a part of the Yarlung Tsangpo River.

Naturally, anything related to this particular river would impact such Arunachal Pradesh rivers like Siang/Dihang River and the rivers like Brahmaputra, Luit and Dilao in Assam.

In Tibet, the Brahmaputra is called Yarlung Tsangpo from which the artificial lake has been created to pose a permanent threat perception to the Northeast.

The danger can be gauged from the fact that Yarlung Tsangpo flows along the southern part of Tibet to break through the Himalayas in great gorges including the Yarlung Tsangpo Grand Canyon to enter into Arunachal Pradesh and flows further southwest through the Assam Valley in the form of Brahmaputra River.

After the Tsunami of COVID-19 unleashed by China to kill thousands in the world, it now stands established Beijing and the expression-less faces of its Communist rulers have no value for human lives. Naturally, the Northeast needs to fear from this ticking “Water Bomb” currently existing in the form of an artificial lake.

Argumentatively, it is more so as the 4,696km Brahmaputra River System of North is very much prone to floods following melting of snow of the Himalaya. On top of this danger, if the artificial lake is purposely breached by China, the very existence of Northeast will be at crisis.

It would also devastate the Meghalayan Hills and the Assam plains besides Arunachal Pradesh which would be its first victim.

Danger Lurks for India’s only Male River: the Brahmaputra

In 1884, the British geo-scientists discovered that Brahmaputra River is having its origin at the Yarlung Tsangpo. If flows downstream from Tibet to Assam. Prior to that, the origin of India’s only male river Brahmaputra was not known to us. In the olden days, it was also called the Tsangpo-Brahmaputra River. This is sacred to the Hindus as it is called the Son of Brahma, the creator of universe as per the mythology.

At a juncture when the Chinese army is playing hide and seek in the Himalayan region with not taking back its armed platoons backward as per the diplomatic talks with India and recent utterances of the Defence Minister Rajnath Singh that Beijing is not following the protocols, the danger of purpose-breaching of this lake just cannot be ruled out.

Since the Yarlung Tsangpo is located at the upper stream of the  Brahmaputra River and forms the South Tibet Valley and Yarlung Tsangpo Grand Canyon before passing into Arunachal Pradesh, the risk factor of this “Water Bomb” becomes self-evident.

The “Everest of River” is a Himalayan Danger of Northeast