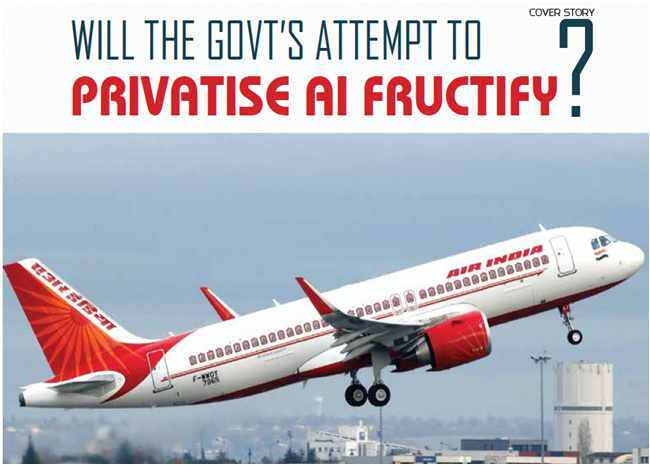 The prudence has prompted at last for the Central Government to initiate measures in right earnest for disinvestment process of the renowned Air India airline. However, the government hastened to announce that it cannot take place before 2022, much to the chagrin and discomfiture of the stakeholders. It may be recalled that Multinational organisations including the Tata Group and some employees of the airline, evinced interest in buying the Air India. However, the present government led by the Prime Minister Narendra Modi cannot be faulted entirely for the sordid state-of affairs, as there was no positive response for the government’s proposed disinvestment of the air line three years ago.

There is no iota of doubt that the Tatas undoubtedly would view Air India sentimentally, as the airline that emerged out of Tata Airlines in 1932 was rechristened as Air India in 1946. The present government is under the impression that the airline had been mismanaged in the past. Consequently, the losses that the airline suffered at regular intervals had a toll on the exchequer. Is it not high time for the government to scout for a suitable buyer, or else the situation would go from bad to worse? There are no two opinions that the government had faced constraints during the period 2018-19, as the debt stood at the wallopping figure of Rs 58,256 crore.

It is indeed heartening to hear that in order to gear-up Air India for strategic disinvestment, a debt of Rs 29,464 crore was allowed to be transferred to a Special Purpose Vehicle (SPV). The government, however, has to bear in mind that though, it is wiser to indulge in pragmatism for future course of action, and the disinvestment exercise pinpoints the irrationality of ownership laws in civil avitation, as the government has made it crystal clear that the Foreign Direct Investment (FDI) should not exceed 49 per cent. The current legislation promises that substantial ownership and effective control shall continue to remain with India. The stringent laws, however, deprive aviation industry, and, more so, Air India of a wider pool of capital and management expertise, as a section of experts attached to the aviation industry apprehend. They also asserted that it does not augur well for the Indian government to suspect the investment from abroad, as the time is ripe to open the airline for skies.

The Central government, as the reports suggest is chalking up a strategy before setting up the final frontier of its economic policy, ahead of the general elections in 2024. Importantly, it has to bear in mind the coming budget when it reveals the obstacles it poses to the government in the aviation industry.  It may be recalled that the government had permitted 49 per cent ownership of a foreign airline for Air India, after the performance of the national airline started deteriorating for a considerable period. The government, however, realised the exigency of the situation, after its Cabinet Committee on Economic Affairs had revealed the pathetic plight of Air India. The relaxation in ownership norms would enable the government to facilitate the process for bidders like the Singapore Airlines and Jet Airways, apart from finding avenues for assessment and investment opportunities for Air India.

The government is not expected to face opposition for floating additional tenders for inviting foreign airlines to bid for Air India after the Budget. However, the worrying factor for the government is that only 28 per cent of the targeted Rs 15,000 crore had been realised so far, as the once renowned airline’s debt escalated to about Rs 50,000 crore. The government is aware of its responsibility in tapping the potential investors. However, considering, Air India’s long-haul international routes and not less than its 40 fleet of aircraft, it will be a herculean task on the part of the government to woo the investors in the right direction. Keeping the gravity of the situation in mind, the government has postponed the sale of the airline till next year, reasoned some airport correspondents.

Interestingly, the Minister of State for Civil Aviation, Jayant Sinha, says that disinvestment process for Air India will be completed within this year, even though the government has ruled out any such possibility before 2022. The moot point, however, is, whom should the people leave the benefit of doubt? There are no two opinions that if it materialises within the stipulated time, as promised by Mr Sinha, the government can heave a sigh of relief. However, grapevines in the political circle aver that Jayant, being aware of his father and the former Union Finance Minister Yashwant Sinha’s vehement criticism of the Union Government’s economic policies, might keep the Prime Minister Narendra Modi and the Home Minister Amit Shah on tenter hooks as far as schedule of the disinvestment process is concerned.

A section of people in the aviation industry feel that the sale of Air India will not only set a worthy example for other sectors craving for privatisation, but this meaningful step, will also embolden the government to strategise its role for expansion of private sector in India in a phased and fined-tuner manner during the course of time. Sources in the airline industry affirm that the government does not wish to create an impression that it gets carried away in purusing the FDI, as it also has to keep in mind the coming assembly elections for West Bengal, Assam, Tamil Nadu, Kerala and Puducherry. It would be naïve to expect that that the government would showcase its mettle and vigorously pursue its disinvestment process at the cost of losing its vote-bank. The Prime Minister and the late Union Finance Minister Arun Jaitley, time without number, made it clear that the government would not pay attention only to the commercial aspect of any competitive sector and the civil aviation is not an exception.