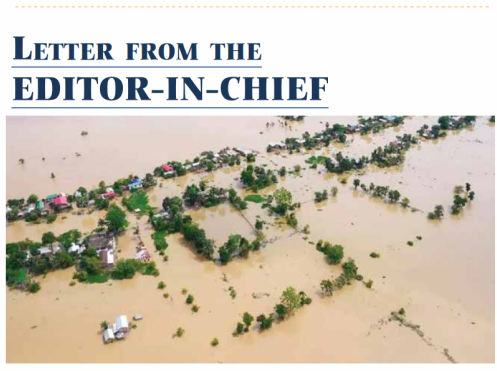 Water Water Everywhere - but no drop to drink anywhere. This is how we can summarize the present crisis of flood in the state of Assam. Assam has faced the second wave of flood in this month, affecting around 40 to 50 lakh people. The worst affected among these is the Cachar District in which the city of Silchar is the real cause of concern.

I was in Silchar and returned on the 21 of June by flight. In between the stretch from city to the Airport, I had to walk in the water up to my vest. This was my first experience of walking in the water. The situation and suffering of the people of Silchar cannot be described in words. One has to see to believe. I have seen it. I am shocked. The very rich people were seen crying for a bottle of water. Question of getting food stuff was out of place. As and where it was available, it was with premium. But I must compliment the Deputy Commissioner Smti Keerthi Jalli, playing her role effectively.

The words of Madam Keerthi Jalli reflect her concern. Not only that the Chief Minister Mr. Himanta Biswa Sarma visited Silchar twice and personally supervised the relief work. He was walking in the floods like a common man, thus giving moral boost to the people of Silchar. I must say, humanity in India is still alive. Apart from government, a large number of NGOs were active and serving the people. The list is long. The most effective was of course the Lions Club, which has many branches in the city of Silchar doing marvelous work under the supervision of its District Governor Shri Subhankar Sen. Hats off to them.

Surprisingly, the state like Mizoram, which had a border clash with Assam just one and a half years back, is now sending the drinking water by trucks upto Assam Border. It is really wonderful. Railway has come forward a bit too late and announced that it will transport relief materials to flood hit North Eastern states free of cost.

No doubt, some relief has come as on  28 June 2022. Water level in several parts of Silchar has reduced. It is expected that things will improve soon. The situation in few lanes like Das Colony, Jeevan Jyoti Lane etc are still very alarming.

It has been repeatedly alleged that this flood has been man-made, as the embankment of the river was dislocated, thus diverting the water to the city. This is an area of investigation which can take place only after the rainy season is over. This flood at Silchar has left many questions unanswered. Why the national television has been silent. No debate or substantial coverage? Why the regional planning body like the North Eastern Council failed to prepare any master plan to stop the annual occurrence of flood. We may also raise the same issue with IIT Guwahati and various Central Universities of North Eastern Region. Perhaps, they have to be made sensitive to the issues of flood relief NGO works provide short term benefits. Long term need is to ensure measures to utilize the water of floods in a manner that works for the benefit of the society.

We from Eastern Panorama in our June 2022 issue have given a series of suggestions and brought to the notice of the administration about floods, landslides etc. We know these are natural calamities, but cannot be controlled 100%, but much can still be done. Those who missed our June issue can still read the same by going to www.easternpanorama.in