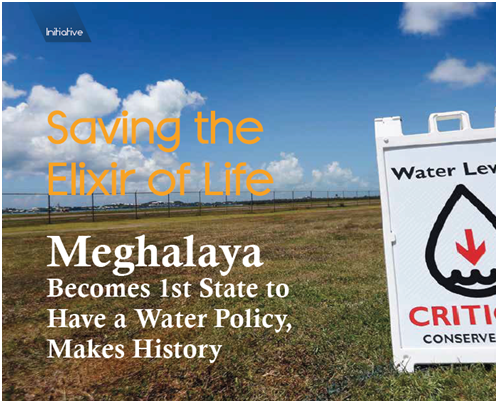 If it really is a matter of pride to be 1st in anything then Meghalaya has reasons to be proud. By becoming India’s first state to declare its own water policy, this state has occupied a place in the history of water conservation.

On July 13, 2019, Meghalaya -- literary meaning the abode of cloud -- made a very bold beginning with the State’s Cabinet approving the Draft of the Policy in the presence of Chief Minister Conrad K. Sangma.

The Chief Minister also very aptly gave his message to the country through Twitter: “It is historic for #Meghalaya as we have become the first State in the country to have a State water policy.”

This revolutionary step comes close on the heels of launching of the Jal Shakti Mission of Meghalaya government to solve the problems of the people related to water shortage.

At a juncture when different parts of India are facing acute shortage of water, it is heartening to find that Meghalaya takes the initiative to make water as a matter of state policy. Here, we must say that some other states, though prone to drought, did not declare any water policy of their own. This decision of Meghalaya would now prompt them to have their own water policy which will have long term benefits.

Naturally, the Deputy Chief Minister Prestone Tynsong merits thumping of table in his support nationally for initiating a new chapter in the state policy. By declaring that water would, henceforth, be a part of sustainable development of the state, scientifically managed and the community also would be involved in using and conserving water: the elixir of life.

The Meghalaya Water Resources Department played a vital role in drafting this policy with the help of other experts in the areas of protection of water bodies and water conservation.

This policy draft, in a way, showed that Meghalaya follows the principle of 3Rs: Reduce, Recycle and Reuse. To exemplify, the policy says all new buildings will have roof-top harvesting facility of water during monsoon. Besides, the water bodies that have gone dry will be repaired, renovated and restored.

The draft policy needs to be praised in a sense as it is inclusive with points made for involvement of the people of the state in conserving it. It would not only promote their belongingness to the state but also made them proactive in saving water, avoiding water wastage, save water from contamination and protect the watery resources like lakes, rivers, reservoirs and ponds.

A notable factor about the draft policy is that, it lays down quality check procedures to control, manage and protect the groundwater. As the state is already having its own water conservation policy, this draft-provision would be an added advantage for long term ground water management strategy.

The draft policy says Meghalaya will constitute a “Water Sanitation Village Council” at village level for efficient and effective implementation of the water policy. This is a major step in saving water that will automatically develop a mechanism to control the ground water level.

The construction of check dams as enumerated in the policy is a revolutionary step in conserving, creating rainwater harvesting systems and checking rampant misuse of the groundwater.

The policy, in fact, holds the key to provide safe and hygienic water for various purposes like drinking, domestic, sanitation and livelihood development. The rainwater harvesting also have been accorded a special place in the draft.

Here, it must be mentioned that once the state has implemented the water policy, the people of the state can get drinking water free of alkali and iron. All water bodies would be cleaned as part of the policy.