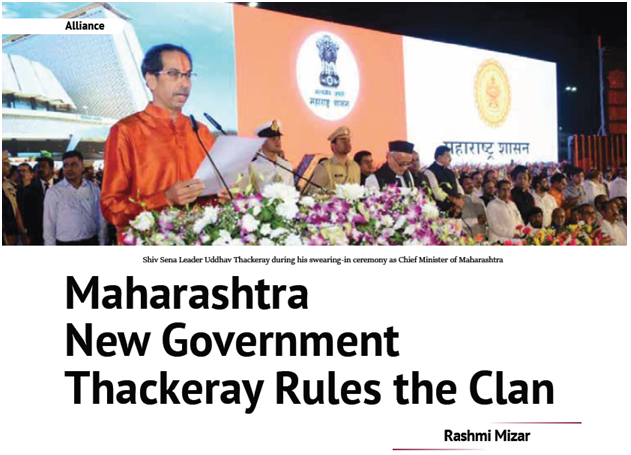 With much of high drama in political upliftments of Maharashtra, with many twist and turns, Shiv Sena President Uddhav Thackeray is the new Chief Minister of Maharashtra also the first to occupy the Chief Minister position from the Thackaray family and as the eight minister to take an oath for the responsible post.  He is the third Sena Chief Minister after Manohar Joshi and Narayan Rane. The first Sena Chief Minister of a secular government is propped up by the support of two unlikely allies paired with ideological opposite Congress-NCP alliance to form the government in Maharashtra under the aegis of a new alliance - Maha Vikas Aghadi. From Sharad Pawar's Nationalist Congress Party state unit chief Jayant Patil and senior leader Chhagan Bhujbal were sworn in at the ceremony held at the iconic Shivaji Park in Mumbai along with Congress camp, Maharashtra unit president Balasaheb Thorat and former state minister Nitin Raut. From the Shiv Sena, its leader Eknath Shinde and Subhash Desai took oath as a minister which marks up an end to the for long political instability in Maharashtra for a while.

It is rightly said, that in politics, anything can lead the foe to be friends or friends to be foe. Anything can change, when we talk about the power, especially when it comes to political power with an example seen as the parties juggled from being the Shiv Sena –BJP alliance to Shiv Sena- Congress alliance within few hours.

In the first Assembly elections held in Haryana & Maharashtra, BJP’s anticipation for winning a maximum number of seats had met with a resistance, where we have seen last month, that the competitive parties had to struggle to form the Government with  the dependence on the other parties. Grabbing an opportunity, the other parties, which we meant is Jannayak janta Party (JJP) in Haryana and Shiv Sena in Maharashtra has left no stone unturned to play with the powerful political bodies, which is quiet appreciable. BJP was dependent on JJP in Haryana and Shiv Sena in Maharashtra, where CM Manohar lal Khattar was set to compromise the seat with Dushyant Singh Chautla as Deputy Chief Minister in Haryana, whereas the same tactics did not work in Maharashtra. The reason being Uddhav Thackary’s 50-50 sharing formula, pre-decided between Shiv Sena and BJP before the assembly elections held on 21 October 2019. The BJP ended with a tally of 105 in the 288 member Assembly. The Sena won on 56 seats, the nationalists Congress party NCP on 54, while the Congress won 44 seats. BJP and Shiv Sena won the absolute majority in the Maharashtra assembly polls, but no clarity was shown on how the party was formed.

So all the drama started, when Devendra Fadnavis denied promises to the party and declared that no such agreement were made for seat sharing, opposing to which regional party chief Udhav Thackarey cancelled meeting with BJP on the formation of the government. Uddhav Thackeray walked out of the NDA and reached out to NCP which had won 54 seats and the Congress with 44 seats for the formation of government in the state.  Thereafter, President Rule was imposed in the state as no party came forward clearly to form the Government.

Hours after the alliance of Shiv-sena, NCP and Congress was announced, in a surprise Governor of Maharashtra Bahgat Singh Koshyari invited Devendra Fadnavis to form the Government with Ajit pawar, who is the leader of the National Congress party and the nephew of Sharad Pawar. The Governors decision was based on the letters of support sent by Ajit pawar to BJP. The alliance was agreed where Fadnavis was sworn in as the Chief Minister and Ajit Pawar as the Deputy Chief Minister.