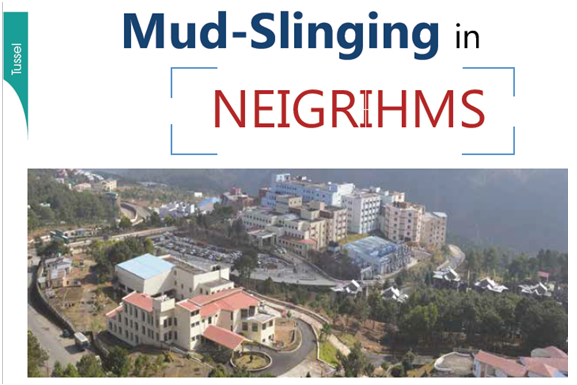 It has also come to light that two complaints from Prime Minister’s Office (PMO) to the Union Ministry of Health and Family Welfare forwarded to NEIGRIHMS regarding the scenario in the Hospital. Following this, a committee was formed by Director, NEIGRIHMS to get the requirements from various departments so that the stents or pacemakers, costly drugs and disposable could be made available through revolving fund or Amrit pharmacy, but due to lack of co-operation by the HoD Cardiology, the list could not be finalized. It was also alleged that a vendor in connivance of the HoD Cardiology used to get stents in the morning to the Cardiology Lab and sell to the patients on the advice of the cardiologists on the day of the procedure at a very high cost, despite the capping of rates by the Ministry.

Meghalaya Health and Family Welfare Minister, A. L Hek convened a detailed review meeting of the ongoing events in the prestigious institute. A.L Hek through Secretary of Health & Family Welfare department, Pravin Bakshi sent a letter to the Director of NEIGRIMS to take immediate steps to call for a general council meeting. The Minister had also sent a letter to the Union Health Ministry on the ongoing tussle. A.L Hek said “Since the time, the new director has come, we have received many complaints and if people are not happy and think that the Director should be changed, we will convey the same to the Ministry”.

The letter read “It is the opinion of the Health Minister that the governing council of NEIGRIHMS may be convened at the earliest so that all contentious matters could be discussed therein and a decision arrived at.”

TheKhasi Students’ Union (KSU) on 13th May 2019 had locked the Office of the Director of the institute over the ongoing crisis in the North Eastern Indira Gandhi Regional Institute of Health and Medical Sciences (NEIGRIHMS). KSU President Lambok S. Marngar demanded that the Director Dr D. M Thappa should be removed and the Union will make sure that the Director leaves this place.