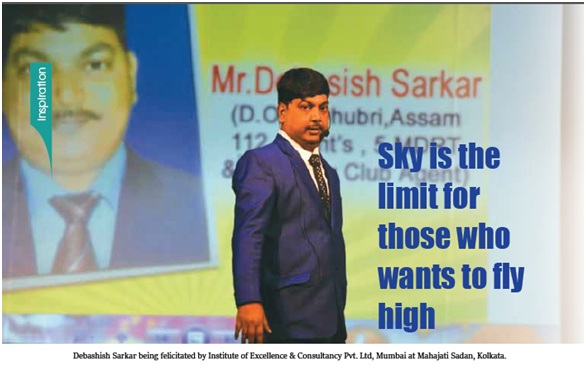 A seminar on "how to increase your present income Level or Build up Secured Career” under Central government organisation was held under the auspices of  Media Study and Research Centre (MSRC) of Dhubri at Town Hotel Conference Hall on May 20.

Nearly 100 educated housewives, girls and young boys participated in the seminar address by one of the most successful LICI Development Officer (senior business associate) of Dhubri under Bongaigaon Division, Debashish Sarkar. Sarkar in his hour long deliberation as the Chief Guest and key speaker stressed on the quality and hidden talent among the participants, which they hitherto not felt.

“To achieve anything worth in your life, you will have to work hard with self belief in you. Because, sitting idle in home, you cannot gain anything. You will have to come out and meet people and become financial consultant and get benefits by benefiting them” Sarkar added.

Sarkar also interacted with interested participants and answered queries from them while inviting them to his chamber in Dhubri to know more as how to meet the goal of the secured future and build a career with solid financial foundation. Sarkar, in order to prove his point, he produced six of those financial consultants who by their sheer dint of hard work secured their career in this field.

Sarkar while addressing the group said, that despite being well educated, girl are often told and advised to be careful about managing house of their husband as housewife.

Gradually, she too developed feeling of this housewife syndrome and ends up her entire life looking after husband, elderly family members and later dedicated to build future of sons and daughters without thinking about her and her potentialities and hidden talent to do something and contribute financially with all social dignities which is beaten badly, Sarkar added.

He said that, this is mostly prevalent in upper and lower middle class families, but the case is little different when it comes to below the lower middle class families. Here in this class, educated women and girls are seen opting for private tuition, joining private schools or serving in malls or tailoring etc who earn hardly above Rs. 5,000 /- and this is the point where they lost their genuine potentiality and talent to earn more and grow high, he further said.

“This not a story cooked by me but I have grown seeing all these around me. I did not have anything with me to bring them out this circle of dim future. However, it continued to hunt my mind as what could be done for these educated women and girls. The idea got matured when I opened my own consultancy chamber in 2014”, Sarkar narrated.

Narrating the idea to promote this group, Sarkar said that since last five years, he was pondering over as how it could be materialised to enhance and increase their income level and build safe and secured career, then find an institution-MSRC working almost on similar concept to bring out the hidden talent from those who could not fair well in academic field and extremely worried about to build future and make career.

“When the MSRC, an error institution approached me having seen my leaf-lets which I distribute in Dhubri promising bright future by increasing their present income level with secured career, I readily agreed to deliver lecture among the educated women and girls selected by MSRC”, Sarkar informed.

Sarkar said, that he never   subscribe  the concept of agent and instead say  "consultant,  family welfare economics" for advising and making ways out as how to increase the present income level  and build career in this line.

In his deliberation, Sarkar continued to focus on this concept and said that all professionals like lawyers, doctors, sales and income tax practitioners, career councillors etc have their own chamber who work from there but LIC agents, few years ago did not have their own chamber to provide counselling for better financial planning which suits their clients according to their economic ability, and thus (agents) provided services at the door level.

Now all agents and even some time clients do come to my chamber to know and get clear and better ideas of financial planning and me myself make them understand in a simple way possible, Sarkar added.

Sarkar also explained the various levels of achievement and success in this field recognising their hard works with help of Power-Point Projection about Galaxy Club and Million Dollar Round Table (MDRT) -- most sought after target for agents which give boost to their income and secure financial position.