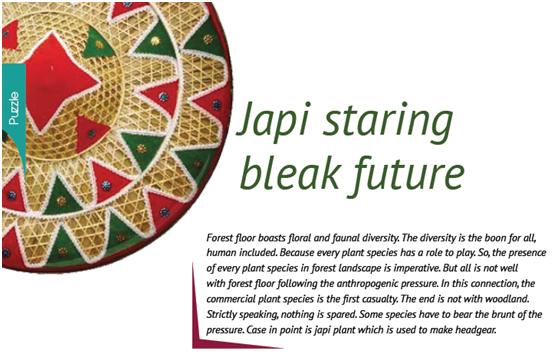 Farmers regard japi as the portable home of the farming field. Along with earthworm, it is all weather friends for the farmer, especially in their bread earning drudgery. While in action, it shelters farmers from rain or sunshine during summer. Sadly, days are seemingly numbered for the dream refuse of cultivators because of the growing sacristy of japi pat.

If our apprehension comes true, the farming fraternity will be in trouble,” Prabin Das, an accomplished artisan in Japi making craft said. Japi, the integral part of Assamese culture and prized possession of farmers are made of particular leaves of a hilly grown plant known as lechara gas Licualapeltata. The leaves of this plant are indispensable in making this headgear if the latter is meant for farmers. Skeleton of the headgear is made of bamboo.

Farmers hold japi in high esteem. While earthworm, the friend of the farmer, makes land fertile, japi keeps the fatigue of farmers at bay by protecting him from scorching heat of the sun or from the shower. So, when farmers kick off tilling activities with the shooting up of mercury level during the months of June-July they never forget to wear this hand-crafted headgear. But the rural artisans foresee bleak future of japi in waiting.

This flora was very much in evidence in yesteryear in the inaccessible hilly terrain to meet the demand. But gone are the days when the leaves were abundant. Prabin Das who graduated in Assamese has been making japi since 12 years of his age, says it is his ancestral legacy which fetches him the economic return to run his family. “We used to purchase japi pat in bulk. Now, I could not as leaves are not sufficiently available in the market,” Prabin says. During the past three months, Prabin supplies about 5000 headgears to different parts of the state. According to Prabin, his supply could have crossed 7000 from April, May, and June. Demand is still tremendous but supply is running short. Buyers come from various parts of the Lower Assam including from Morigaon and Khetri who prefer bulk buying.

Causes of scarcity: Indiscriminate forest decimation, slash and burn farming is attributable to the decline of the plants. A group of harvesters cited fodder scarcity of wild elephant another cause of shrinkage of this plant. Increasing man-elephant conflict due to the depredation of agricultural field in Assam corroborate the fact that food source is not sufficient in the natural territory of jumbo. Gentle giants require 149 to 169 kg of vegetation daily. Ajit Das who plucks these forest-based plants leaves before selling in the market stated that floral community has been brought under tremendous biotic pressure. From some areas like Tengakhat, Puizala the plant has done a disappearing act. Forest dwellers say in hill slope of Mayang-Garong, Bijulibari in Assam and Rajagumai in Meghalaya the plant is found. About 100 forest dwellers of Rajapara, Ranikhamar, Jaramukhuriya, Deopani, and Jimirigaoan pluck the foliage and supply to the market.

Also, utmost care is taken while plucking. Before plucking harvesters shake the plant to get rid of snakebite as venomous reptile take shelter in the leaves. As far as the modus operandi is concerned, the plucked immature leaves are exposed to sunlight which is followed by ironing in a conventional manner to make them useable.

Recently, this writer has ventured out to forest landscape along Assam Meghalaya border where the plants are found but has spotted the sparse presence of the plants. The locals who accompanied this reporter vented that deforestation and dwindling food source of pachyderm are pushing it to the brink of extinction. It is not commercial plant for the smugglers to smuggle but the plants have suffered damage.

A consequence of scarcity: Fallout in the economy of the forest dwellers has been hit. Forest dwellers, who traditionally collect the leaves from January to June, usually make a quick buck by selling leaves in the market with the arrival of pre-monsoon. But now, their harvest falls short of demand and failed to earn. Similarly, the unwanted development did not spare the economy of the artisans of this craft. They are in distress as well for failing to supply adequately. Yes, right from japi pat harvesters to japi makers’ economy of all are hit.

There are two kinds of headgears the artisan make-haluajapi and Jaluoijapi. Jaluoijapiis meant for those women who plant paddy sapling. It is smaller than haluoijapi. Ploughman wears haluoijapi. Mention ably, only the unfolded soft portion of the foliage comes into use in making the headgear. The matured leaves which are an adequate substitute for thatch are used to the sewn roof of the house. On the specialty of the foliage, a harvester said that the leaves being fairly cold there is no exception to this nature’s bounty and farmers find comfort by wearing it in the scorching heat.