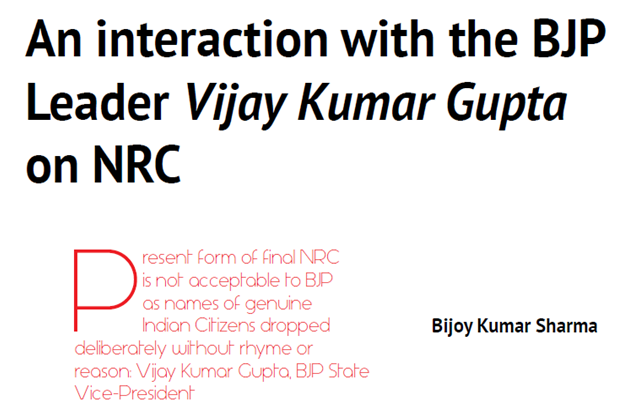 BJP State Vice-President, Vijay Kumar Gupta is one of veteran and deep rooted  BJP leader in the party, who over the years shouldered many a responsibilities in various capacity at different point of time  since the inception of the party in Assam. Because of his service and contribution in the party, he was not only elevated to the post of Vice-President of state BJP but also appointed as the Chairman of Assam Financial Corporation (AFC).

Gupta was on two-day visit to Dhubri district early this month to take stock of the situation prevailing in Dhubri district after publication of NRC final list and  to interact with the people whose names did not figure in the final list published on August 31. Vijay Kumar Gupta (VKG) exclusively talked to Associate Editor, Bijoy Kumar Sharma (BKS) at Circuit House here, expressed his views and points of resentments on NRC. The excerpt of the formal talk as follows.

On exclusion of names of genuine Indian Citizens

VKG: I express my deep sense of resentment over exclusion of names of genuine Indian Citizens that to the tune of lakhs, and present form of NRC update which is full of errors as not only the names of Bengali Hindus and Hindi speaking people but also the names of indigenous people and tribal communities has not been included in the final NRC update.

“I really could not understand as how the NRC update was done? Persons having all the documents and legacy data have been living in Assam since 1938, but name did not figure in the final list. This is absolutely nothing but to harass some targeted community. So, the present form of NRC is in no way acceptable to us (party)”, Gupta candidly stated.

VKG: I have interacted with many party level workers across and held several meetings with people at different places of Dhubri district. “But I was surprise to note  that only in four wards of Dhubri town,  667 names of genuine Indian Citizens did not find place in the final NRC list which is being viewed seriously by the party and working on to find out solution”.

VKG: The party workers in all the districts of Assam are working to enlist the names of excluded names from NRC final list. Once final tally of non-inclusion names by the party's NRC monitoring cell , the party will be able to raise the issue at highest level.

On fixing responsibility for preparing a wrong and farce NRC

VKG : As you know  NRC update – a much sought after and awaited document for the people of Assam that too after four years came to an end with  the final list excluding 19,06,657 names, but now it was nothing more than a heap of waste papers after expending Rs. 1,600 crores, engaging 52,000 state government employees for over four years.

“The valuable time, extensive labour and huge amount of money lost owing to arrogant attitude of Prateek Hazela who miserably failed to bring out a correct NRC. He is the only man responsible for NRC mess up. He had danced at the tune of few organizations, who were reportedly active behind the screen. But now see, no political party or any organisation is happy with NRC final list”.