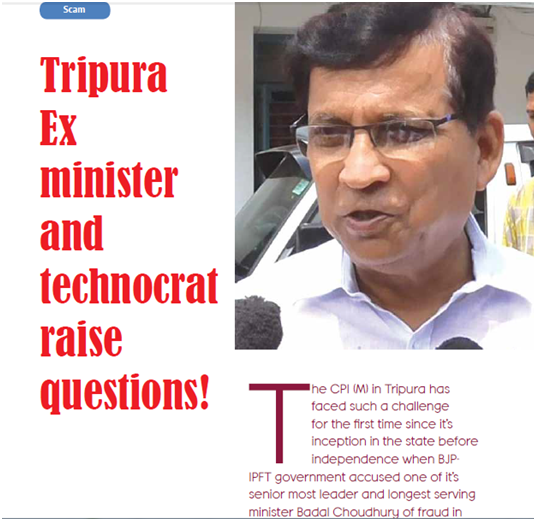 The CPI (M) in Tripura has faced the challenge for the first time in it’s existence in the state before independence when BJP-IPFT government accused one of it’s senior most leader and longest serving minister Badal Choudhury in Rs 164 Cr scam under PWD during 2008 – 09. While ruling BJP claimed it as a smallest financial scam of 25 –yrs old uninterrupted communist rule in the state, CPI (M) accused Chief Minister Biplab Kumar Deb of pursuing vendetta politics to secure his chair. Though there was so far no trailing record of money claimed to be siphoned off, the documents showed it was a gross irregularity in the part of the government. Two subsequent actions, one from the part of the government and other from the accused persons made police hostile, which might create disruption in the process of investigation and obvious result. The allegations lost it’s merit at the initial phase when state vigilance authority filed an FIR naming three persons – the then Minister Badal Choudhury, then Principal Secretary PWD who retired as Chief Secretary Y P Singh and then Chief Engineer Sunil Bhowmik under section 418, 409, 420, 201, 120 (B) of Indian Panel Code and section 13 of Prevention of Corruption Act. Immediately police swung into action and arrested Sunil Bhowmik.

Meantime, ex minister Choudhury got two days anticipatory bail and there was no move to arrest the third accused Y P Singh. After sanction of anticipatory bail to Choudhury, the state government preserved it as a defeat of them and the government accepted securing his arrest is a challenge. On hearing of his bail petition on Oct 16, the court also took unusually longer time to announce the decision that created much hype. The court had concluded the hearing before lunch but announced the order at around 11.45 pm rejecting the bail plea. Before that the CPI (M) party office was gheraoed by police and all other possible places of movement of Choudhury was under security surveillance. Interestingly, soon after his bail plea rejected entire police force including DGP went on search across the state for six days but failed to trace out Choudhury. However, on Oct 21 when he fell serious ill and had gone to a private hospital, police arrested him there. The disappearance of 76 –yrs old communist leader who is charged with corruption has sent a message that there might be his involvement otherwise; he could have faced the trail. On the other, Chief Minister Biplab Kumar Deb took Choudhury’s disappearance from security cordon as a defeat of his administration and suspended as many as nine police officers including an IPS, posted as SP in West Tripura, removed a DIG and transferred six policemen. Such action from the government during enquiry of a high profile corruption case told upon the morale of police that would certainly reflect in the investigation of the case and future performance of police. Moreover, case was registered under Prevention of Corruption Act without mentioning specific sub-section of section 13, which has indicated doubt on the intention of the government. Since, charge was label for siphoning off Rs 164 Cr, there must be some record of money transaction among the groups but it is found absent in the case document. Neither police asked anything to the contractors who was allegedly favoured by the accused persons nor traced any record of transaction, which naturally raised questions on the merit of the case. The activities of police and the government in next 15 days after filing of FIR seem that arrest of the accused persons were the ultimate motive of the case not to dig out the corruption and recover the money.

Meantime, a session court issued search warrant against third accused of the scam the then principal secretary of PWD who was later elevated to Chief Secretary and after retirement he had been appointed as Chairman of TPSC for two years. Early this year, he returned to his home town Uttar Pradesh after completion of his tenure in TPSC. When vigilance started investigation into the scam in July this year, Singh was summoned to appear before the investigator and he had appeared also. After lodging FIR, police had reportedly tried to contact him over phone but could reach. Accordingly, they urged the court to issue warrant against Singh and allow police to conduct search in his house and other probable locations. Police has already arrested two other accused of the case former PWD Minister of left front government and CPI (M) Central Committee Member Badal Choudhury and retired Chief Engineer Sunil Bhowmik but both of them are admitted to hospital now. However, Bhowmik had been to jail custody initially for two days and five days in police remand in two phases till he was admitted to hospital. Badal Choudhury was initially given bail but when the bail extension was rejected he disappeared from the police network. Later, when got admitted to a private hospital with serious health complaints police arrested him. Choudhury was arrested at midnight, soon after a vacation bench of high court concluded hearing on his anticipatory bail. A group of lawyers had moved a bail petition in for Choudhury in the high court claiming the case as weak in nature and also he is critically sick.  However, doctors said Bhowmik’s condition was stable but, as his sugar level is still high along with other complications still he was released from ICU. The doctors did not allow police to take him to the court. The condition of Choudhury is also stated to be improving but still in critical stage. The state government has constituted a special medical team to look into the health condition of the former minister who had bypass surgeries and diabetic. The CPI (M) Politburo condemned the arrest of Badal Choudhury, while he was in the ICU of a private hospital in Agartala.

In an exceptional move in a cabinet meeting headed by Manik Sarkar on July 31, 2008 had taken decision to execute construction works ‘at cost plus basis up to 10 percent’ of the estimated value of the work by PSU or private companies. Accordingly, PWD department invited expression of interest for13 constructions works clubbing together amounting to Rs 638.8 Cr on September 11, 2008 from PSUs and closing date of the bid was Sept 24. Two days ahead of the closing date of submission of bid on Sept 22, 2008, the department invited separate EoI for the same work from private companies’ extending the closing date for them up to Oct 17, 2008.