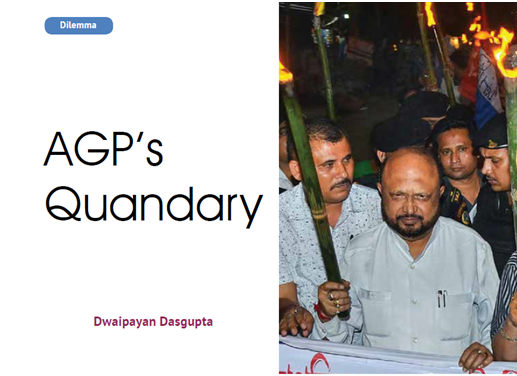 It probably needs no elucidation that a feeling of alienation and frustration among religious and ethnic groups in a region is born out of the indifferent, flippant attitude and approach towards their hopes and aspiration. There are a number of complex issues troubling Assam for a pretty long time now. Ever since the country attained independence in 1947, a series of government in the state had come and gone. But, it is ironic that some of them still remained unresolved, one being the migration of large-scale illegal immigrants from East Pakistan, now Bangladesh, despite repeated pleadings with the Congress government by the diverse ethnic entities and civil society groups posing grave threat to the very existence of the indigenous Assamese people. This induced a strong sense of deprivation and frustration among large sections of them, which in turn, manifested itself in the protected six-year Assam agitation against the influx of illegal foreign infiltration.

It may be noted here, that the AASU- AGSP leaders had started the state-wide anti-foreigners’ stir in 1979 following the detection of the presence of the names of hundreds of suspected illegal migrants in the electoral rolls in Mangaldoi parliamentary constituency, the up-gradation of which was necessitated for a by-election due to the sudden demise of the MP Hiralal Patowary. The six-year long massive movement which witnessed the supreme sacrifices by 855 Assamese youths and many others  culminated in the Assam Accord signed between the Prime Minister Rajiv Gandhi, the State government and the AASU-AGSP leaders in August 1985. Soon thereafter, that is in the very next year there took place the Assembly elections in the State and, the AGP as a part of regionalism was voted to power with a massive mandate in the hope that  not only it would  articulate regional aspirations and keep the flag of Assamese nationalism flying. But regrettably, rather than trying to stand guard against the divisive forces hell bent upon  to change, the demographic profile of Assam by encouraging illegal immigration from across the border, the regional party only added to the disaffection of the people of the State.

The consequent upon which, its public image was eroded, so much so  that resonated in the subsequent Assembly elections in 1991, when the regional party received serious reverses at the hands of the Congress party in spite of its having strong footing. Although the AGP again had the rare privilege of governing the state for another five-year term, it did hardly anything precious gratifying during the tenure in office to gain its lost credibility. So in any of the subsequent Assembly or Lok Sabha polls in the State whatsoever, the regional party was hardly able to improve its performances. In the May 2019 Lok Sabha elections also, the party could not manage even a single seat. Earlier in the State’s Panchayat elections too failed to amass a respectable total. All these dismal electoral showings are a clear indication that the AGP has lost its relevance in the State politics. Indeed it won few seats in the 2016 Assembly polls after its seat-sharing arrangements with the BJP. But it was a small solace, compared to its vote share being a meagre 8.1% as against 16.3% in 2011 Assembly elections, given its an overwhelming majority it had notched up in its first debut 1986 State elections.

However, on October 14 last, the AGP celebrated the party’s 34th foundation day. On the occasion, the party leaders appealed to the masses to empower regional parties and speed up the state’s development process. Yes, in a democracy like ours, as popular sovereignty rests with the electorate, their help and cooperation can enable a political entity to assert themselves in a state politics. So should the regional party want to regain its lost political ground, it has to work among the common people much more than mere appealing. The party needs to ponder over how it can refurbish its image and stem its dwindling support base. Of course, it will not be an easy job on the part of its senior leaders to do so because the party at present suffers from infirmities. As a result, it fails to manifest itself as a well-knit and cohesive organisation that the party was decades ago.

One of its major weaknesses, however, was its lack able leaders who can convince people to join the once-dominant party to defend the cause of regionalism. But over the years, the party did seldom anything precious to groom the second-rung leaders to take up its leadership in the future. There is no gain saying that regionalism has relevance in Assam. So it will never diminish so long as the State’s indigenous communities’ existence-related concerning issues remain unaddressed. The AGP leadership also has asserted that it has relevance in the State. But, tussle for hegemony, egoism and politics of convenience at the cost of the party are what has, no wonder, reduced it to almost a shadow of its former self.