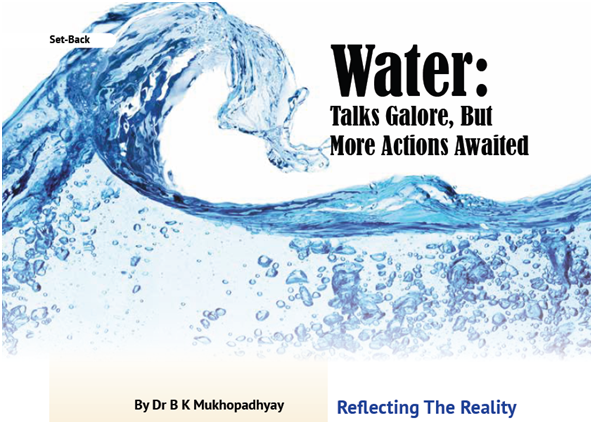 Very importantly UN recently opines that water management must play a central role in adapting to the worst effects of climate change and reducing greenhouse gases.

It is well known a fact today that water scarcity poses a great threat before economic growth, human rights and national security. As per recent UN estimates around 1.2 billion people  - around 20 percent of world population - were living in areas where the limits of sustainable water use had already been reached or breached. It is high time that the issue needs to be placed high on the global agenda. In fact, the world is urgently required to adapt to the reality. There is still enough water for all of us if and only if we keep it clean and share the same. In fact we face the challenge that we must make safer stores of water available to all.

It is not a problem in our country alone – it is a global phenomenon – an area where immediate adequate attention is to be paid so that the things do not go from bad to worse. One third of the U S and one fifth of Spain still suffer from water stress. Central Africa’s Lake Chad, supporting the very life of 30 million plus people has already shrunk one-tenth of its former size, the negative contributory factors being climate change, drought, mismanagement and over use, among others.

It is essential for survival – more important than anything else – the most crucial factor considered from the point of view of environment protection, poverty alleviation and promote development in as much as now globally more than two and half billion people live in the most abysmal standards of hygiene and sanitation. Wastage of water and absence of regular clean water supply not only to the burgeoning metropolis but to huge rural regions also simultaneously coexists.

What is more a cause of anxiety is the fact that the adequate availability of safe drinking water is far from being satisfactory. Though water contains organic and inorganic impurities, the main source of diseases are the organic impurities which enter into the water through the soil from cesspools, through manure, or through sewers emptying their contents into the rivers - from which many cities, in particular get their drinking water supply.

The immediate need is thus there to invest in reliable, proven and advanced water purification system that guarantees the public – in rural and urban areas – safe and pure drinking water at all times. Latest technology available on this score must be extensively made use of in a time bound manner to protect the human beings from getting crushed via pollution routes.

In Lieu of Conclusion

True. We are still at very early stages of awakening. A realistic approach - obviously not by holding Seminars and observance of world water day only – can mitigate the incidence. The responsibility lies equally with the Government sector as well as private sector – checking the unrestricted exploitation of ground water, encouraging planned urbanization, optimisation of use [ read Israel ], restricting the flow of effluents from industrial units to the rivers and obvious enough stricter supervision and effectively discharging the duties and responsibilities related to corporate social responsibility.

As a whole, the system should ultimately work as a part of the solution rather than a problem. The need is to move beyond mere use of water to stewardship – to protect what is steadily becoming an increasingly scarce resource - ultimately benefiting the settlements / communities. It is crystal clear that population growth would put further strain on per capita availability of water. Efforts to enhance drinking water supply must move at a greater speed so as to cover all of the villages with adequate potable water connection / supply.

Technology, needless to say, would play the bigger role in such a context to meet people’s basic needs in a sustained manner. Naturally, protecting fresh water reserves, watershed development, chemical treatments following the safety norms, tackling the arsenic and fluoride contamination, among others, could give rich dividends. It is high time that the gross disparity prevailing on this score requires immediate attention so as to mitigate the incidence. Investment / raising fund allocations on this infrastructure development will benefit all in the long run in as much as it will ensure coverage of all rural habitations to reach the unreached with access to safe drinking water; sustainability of the systems and sources and tackling the water quality problems in affected habitations.

By Dr B K Mukhopadhyay