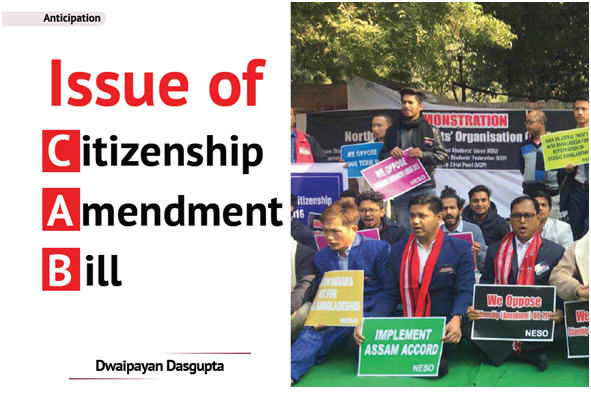 So after few months of a near- congenial ambience prevailing  across Assam since the publication of the final National Register of Citizens on 31st August this year excluding a little over 19 lakh people , the air of the agitation-weary State  yet again decidedly  gets heavy and tension high following lots of excitement stemming from the incumbent BJP government’s  recent announcement that it will bring in and pass  the proposed Citizenship(Amendment) Bill (CAB), 2019  both  in the Lok Sabha and the Rajya Sabha during the current session of parliament which begins from November 18 last. That the ruling party has already made up its mind to convert the CAB into a law is clearly discernable during the recent visit of Union Home Minister Amit Shah to Guwahati where he expressed the party’s commitment to go ahead with it. The Citizenship (Amendment) Bill is among the 27 Bills the ruling BJP or NDA government has approved for introduction and passage in the Lok Sabha.  Although the Bill has not clarified about what will be a fresh cut-off year, yet from the media reports it seems that the new cut-off year can be 1951 instead of the existing cut-off date of midnight of March 24, 1971 set as per the historic Assam Accord, 1985, for updating the already-completed process of the NRC.

The Bill, however, intends to facilitate the grant of citizenship to the non-Muslim immigrants like Hindu, Sikh, Jain, Parsi, Buddhist and Christian, who have come to India from Bangladesh, Pakistan and Afghanistan due to religious persecution. To achieve that end, the Centre seems to be trying to amend the definition of foreigners, and reduce the number of years of residency for the purpose.

The reported initiative on the part of the government to get it passed in parliament has naturally set off a chain of adverse reactions among sections of indigenous tribal and Assamese people in the State. A phenomenon, that is nowhere probably more vividly pronounced than in the ongoing massive rallies against the CAB taken out recently by leaders of different political parties and activists of several leading organisations such as the potent All Assam Students’ Union (AASU), All Assam Krishak Sangram Samity(AAKSS) and the North East Students’ Organization (NESO) in Guwahati.

Notably, the current feeling of fearful anxiety regarding the CAB among the indigenous people in Assam and other States in the Northeast which is the corollary to the union home minister and the BJP President Amit Shah’s  announcement in the Rajya Sabha on November 18 that the Centre gears up to reintroduce the controversial Citizenship (Amendment) Bill in the winter session of parliament, reminds us of the corresponding stiff opposition three years ago, in  2016 to it from a major chunk of population in Assam  that had echoed through vigorous movements by the AASU, NESO, AAKSS, civil society groups, intelligentsia, academics, women, youths. That year on July 15, it was introduced in the Lok Sabha and passed on January 8, 2019. But it could not be tabled in the Rajya Sabha, for, at that time the party did not have the required number as it has at present.

However, as expected, as in 2016, this year also, the two influential students’ bodies of Assam and the Northeast, the AASU and the NESO respectively, have vehemently opposed the CAB, and warned the central government against forcefully trying to impose the Bill in the region. Being peeved at the government’s  decision on this score which was taken without prior discussion with the leading organisations representing diverse ethnic communities in the region, the NESO has of late staged protest rallies in the region’s State capitals against the Bill. The indigenous ethnic organisations and the Chief Ministers of Meghalaya, Mizoram and Nagaland have also registered their protest against it, because it seeks to grant citizenship to six religious communities including Hindu, other than Muslims, who have migrated to India from Bangladesh, Pakistan and Afghanistan because of religious persecution, rendering the cut-off date as envisaged in the Assam Accord redundant. The former Chief Minister of Assam Tarun Gogoi has said that if the CAB is passed in the parliament, the updated NRC will be redundant and if the NRC is updated by taking 1951 as a cut off year, the Assam Accord will be negated.

The doubt about the cut-off date of March 24, 1971 being made superfluous has stemmed from the Union Home Minister Shah’s recent announcement that the NRC would be updated again in Assam along with the rest of the country. If the preparation of the final NRC only for Assam  which was an arduous and back-breaking job, costs the government as dearly as over Rs,16,00 crore, how much money will be required to be spent for the whole of the country for updating  the NRC  for Assam and the rest of the country is anybody’s guess. Moreover, what surprises one is that when Shah is reported to have assured the State that the Centre intends to deport all illegal migrants from the country, his commitment to the CAB is flummox. However, according to the NESO, the CAB is against the provisions of the constitution, and a threat to the languages and cultures of the indigenous communities of the Northeast. The AASU is of the view that if the CAB is passed in the Parliament, the very essence of the historic Assam Accord will be diluted. The Bill is against the electoral promise made by the ruling party, and is discriminatory in nature.