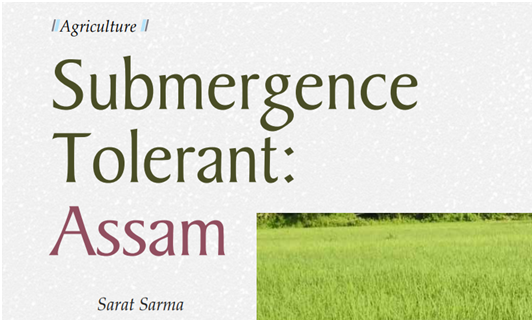 It took 10 years time for Assam government to make the state’s rice farmers shift to new generation crop – Submergence tolerant….and finally the concept is now popular at least among 60 percent of farmers of the flood hit districts.

Three such rice varieties Ranjit Sub – I, Dhansiri Sub – I and Swarna Sub – I are very common in the paddy fields as farmers now have the confidence that these are high yielding in one hand and can survive at least for 21 days under water.

The concept ‘Submergence tolerant’ was introduced for the second point – these varieties could survive for a longer time in flood water. When deluge goes away transplanted siblings rejuvenate rescuing the farmers from crop lost.

A high level source of Jorhat Agriculture University said to Eastern Panorama that during the ongoing rice season (transplantation of which ended recently) farmers mainly of the flood hit districts of the states are found highly inclined towards the submergence tolerant varieties.

‘They either queue in Assam Agriculture University local campuses in their areas or found visiting the agriculture offices asking for Sub – I varieties. If I am not mistaken more than 40 percent sali paddy areas of the state this year is covered by these rice varieties. Result is very simple- after flood these farmers found that their paddy fields get back its green cover as the siblings rejuvenated after passing weeks under water’ said a rice breeder of AAU.

‘Initially the farmers’ response was very poor as they refuse to leave the old traditional varieties. Our repeated attempts, demonstration and awareness programmes brought the farmers closer to the new concept and finally we have reached a very satisfactory stage today. Now when flood submerges their paddy, they feel that the loss is little’ Deb Chaudhury said.

According to a high level Assam agriculture department source, there is a very interesting tale behind the ‘Submergence tolerant rice variety concept’.

‘A group of scientists from Philippines visiting India discovered a serious phenomenon in rice in an Odisha household sometime 20 years ago. The family goes for a traditional rice variety in river bank and interestingly siblings continue their struggle with river water round the season. The group collected the rice seed, and later gave birth to the concept ‘Submergence tolerant’ scientifically.

‘Assam Agriculture University took help from the Philippines based rice organization directly in last 10 years to promote Dhansiri Sub- I and Ranjit Sub –I within the AAU campus’ the source said.

Anyway, arrival of the crop seems to be a big message for the state where 40.8 lakh MT paddy produce during Sali season if flood does not disturb. Assam has 18 lakh hectare Sali paddy area and the states Sali paddy productivity is 2205 kg rice per hectare.