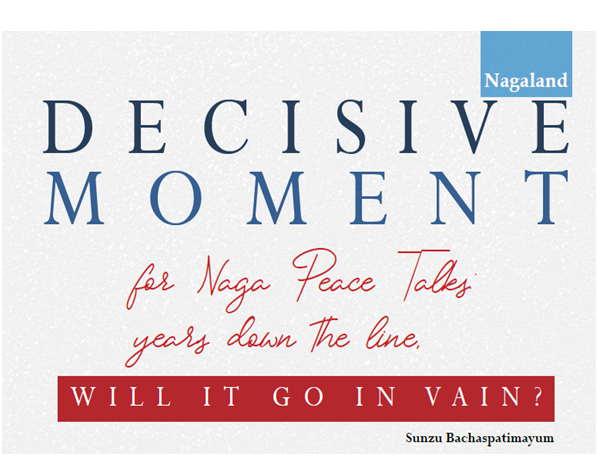 “The road to a final deal has become ticklish as the sensitive issue of Naga flag and Yehzabo,” that’s the Naga constitution, “remains as the sticking point. We have stood our ground on these two non-negotiable issues and we shall continue to stand till the last man standing. NSCN shall be failing before God and before the Naga people if we stumble at this most decisive moment of our history.”

This statement of the Isak Swu and Thuingaleng Muivah group of the National Socialist Council of Nagalim, NSCN (IM), released on 3rd October 2020 has split the beans that the 23-year old peace talks taking place between NSCN (IM) and the Government of India through an interlocutor is in trouble waters and its currently at the point of collapse. According to NSCN (IM) Chief Negotiator, Th. Muivah, “the Nagas will never be part of the Indian Union nor will they accept India’s constitution”.

Muivah, the ‘Ato Kilonser’ or Prime Minister of the underground Government of People’s Republic of Nagalim or Nagaland, in a recent video interview with The Wire has made it clear that the Government of India through the Ministry of Home Affairs is testing the patience of the Nagas. He added that, so long as the Government of India respects the inherent rights of the Nagas, the Nagas will reciprocate in equal measure. He repeatedly made it clear that the Nagas will never be part of the Indian Union nor will they accept the constitution of India.

If one were to carefully study the transcribe of The Wire interview, the message Mr. Muivah is sending out, both to the Government of India and the nationalist Nagas in all of the Naga inhabited areas in India and Myanmar, is crystal clear.

To the Indian authorities, the ‘Ato Kilonser’ is saying that there cannot be a peace deal without the Naga flag, the Naga constitution and the integration of all Naga inhabited areas under one administration. Mr Muivah say that NSCN (IM) is willing to accept transitional measures before final realization of total integration, considering the difficulties of the Government of India in conceding to the core demand of integration at one go.

Muivah insisted that there would be no compromise on the insistence on the Naga flag and Naga constitution and termed other Naga organizations like the Naga National Political Groups, NNPGs, and several civil society groups agreeable to sign the final peace deal with India without a Naga flag and constitution as “traitors”.

The NNPGs are a group of seven Naga rebel outfits that are also holding talks with the central government, but separately. The Working Committee of the NNPGs on the other hand labelled the NSCN (IM) as anti-Naga accusing it of misleading the Nagas for 23 years.

Responding to Muivah terming them as traitors, N. Kitovi Zhimomi, the convener of the Working Committee of NNPGs said, the outburst would not change the narrative that NSCN (IM) has been anti-Naga all the way down the history of Naga freedom movement. “Naga history reserves the right to determine who masterminded divisions, gave genocidal ideas, put them into action and interpreted covert tribal supremacy as ‘national principle’ or ‘Naga nationalism’,” Zhimomi said accusing NSCN (IM) and asserted that future generations should determine who lived and died as a ‘traitor’ or ‘anti-Naga’.