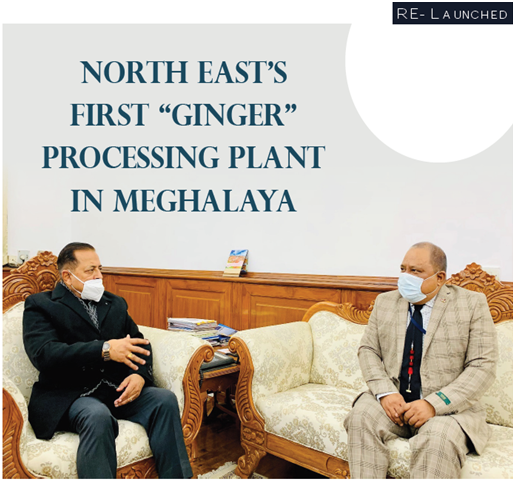 North East’s first-ever specialised "Ginger" Processing Plant at district Ri-Bhoi in Meghalaya is being revived and is likely to become functional in the beginning of 2021.

Disclosing this after reviewing the functioning of the North Eastern Regional Agricultural Marketing Corporation (NERAMAC), a PSU working under the aegis of the Ministry of DoNER, Union Minister of State (Independent Charge) Development of North Eastern Region (DoNER), MoS PMO, Personnel, Public Grievances, Pensions, Atomic Energy and Space, Dr.Jitendra Singh said that the only Ginger Processing Plant of North East India was established around the year 2004 but has remained non-functional for many years. The NERAMAC has now undertaken the responsibility of reviving it and initiated steps to operationalize the closed Plant through PPP mode, he said.

Significantly, he said, ginger has attained a place of prominence in recent months because of its reported properties as an immunity booster against COVID-19 Virus and Prime Minister Narendra Modi had also referred to this recently.

The ginger products being prepared from this Plant, said Dr.Jitendra Singh, will not only be available for domestic consumption but will also have a wider demand and this will also be in keeping with Prime Minister Modi’s calls for “Vocal for Local”. For the PPP mode, an Operation and Maintenance Operator was selected through the tendering process and the work on setting up and reviving the Plant is under progress, he said,

The brief provided by Manoj Kummar Das, Managing Director, North Eastern Regional Agricultural Marketing Corporation (NERAMAC) revealed that the North Eastern Region of India produces about 450,000 Metric Ton of high-quality ginger every year but most of it is sold at a lower price due to lack of processing and cold storage facilities. The Plant at Meghalaya will give the much-needed facility to the ginger growers and they will be able to use their capacities and at the same time optimally utilize the natural resources.

In addition, Dr.Jitendra Singh was informed about the plan to set up 100 new fresh retail points in Northeast and Fruit Kiosks at Guwahati and other major towns of the North Eastern Region. Most of these will be in the PPP mode. The NERAMAC has also undertaken the responsibility to develop marketing complexes with state-of-the-art facilities.