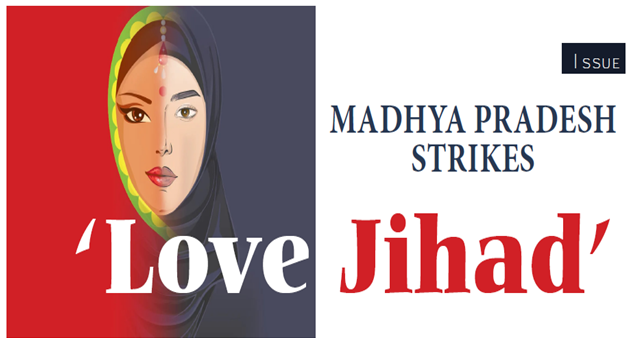 “Love jihad” is widely believed to be a conspiracy theory used by right-wing groups who accuse Muslim men of converting Hindu women by marriage.  Now it is going to be a punishable offence in Madhya Pradesh as the Shivraj Singh Chouhan government is bringing a bill in the state assembly against forced religious conversion for marriage. Four other BJP-ruled states—Uttar Pradesh, Uttaranchal, Karnataka and Haryana—are in varying stages of introducing bills to criminalise what the party calls “love Jihad.”

The sudden uproar over penalising “Love Jihad “ appears to have been triggered by the murder of Haryana girl Nikita Tomar in October this year.  As the murder case continued to grab headlines with her family members alleging that the 21-year-old had been shot dead by a Muslim man whom she had refused to marry, BJP-led state governments announced they will pass laws to prohibit interfaith marriages involving forced conversion.

Madhya Pradesh led in this direction. On November 16, state’s Home Minister Narottam Mishra announced that the BJP government is planning a law that will have provisions for five-year imprisonment for ‘love jihad’. The provisions will be made in the Madhya Pradesh Freedom of Religion Bill, 2020 to be tabled in the state assembly in next session beginning from December 28.

However, neither Narottam Mishra nor officials of the home department officials shared statistics to prove the existence of or a surge in what they call ‘love jihad’ despite several questions from journalists looking for data.

In his first announcement the minister had said: “We are deciding that the use of inducements, seduction, fraud or duress for marriage and religious conversions will invite five years’ imprisonment.,”

Ten days later, the government doubled the jail term for forced religious conversions for marriage from five years to 10 years in its draft bill against “love jihad.”,

“Under this proposed law, the parties concerned will have to submit an application to the district magistrate before the conversion for marriage,” the minister said.

It will be mandatory for the person converting to another religion for marriage, and the religious persons involved to obtain permission of the district magistrate concerned a month in advance. Any offence under the new law would be non-bailable and cognisable.

The bill also included the provision of a five-year jail term for priests or religious gurus who solemnise inter-faith marriages without permission from the district magistrate. The government would have the power to cancel the registration of organisations facilitating such marriages.

The Madhya Pradesh government’s announcement came a day after the Uttar Pradesh cabinet cleared an ordinance to check cases of “love jihad”. The ordinance provides for a jail term of 1 to 5 years with a penalty of Rs 15,000 for forceful religious conversion. For converting minors and women of Scheduled Castes and Scheduled Tribes community, the punishment goes up to 10 years in jail.

Other BJP-ruled states such as Karnataka and Haryana have also spoken about introducing laws against “love jihad”. Karnataka Chief Minister BS Yediyurappa had said in November that his government would take measures to end religious conversions in the name of “love jihad”. Before that, his Haryana counterpart Manohar Lal Khattar had said that he was considering introducing “legal provisions” to curb “love jihad” cases in his state.