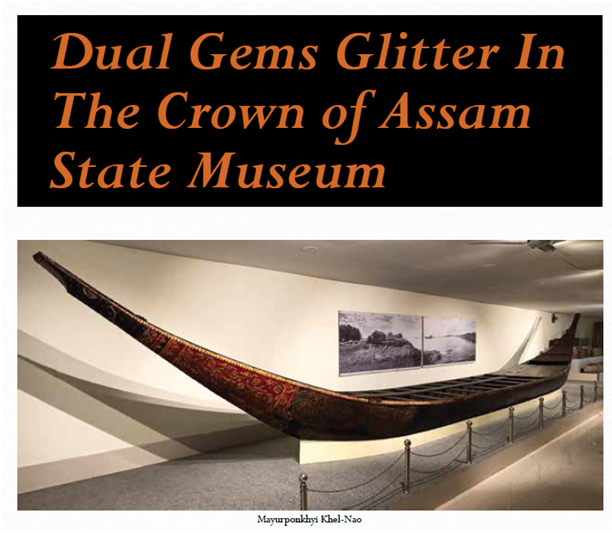 On the day of opening both the galleries for visitors, Directorate of Museums conducted a day long programme at it premises recently.

The programme commenced with the inauguration of two newly developed galleries, namely the "Mayurpokhyi Khel-Nao gallery" and the "Natural History Gallery".

The khel nao was introduced in the Kamalabari Satra of Majuli at the time of Padma Ata as a mode of transport, which is a unique piece of collection in the Assam State Museum, opined the Museum officer Mrinmoy Das while talking to Eastern Panorama.

"It was donated to the Assam State Museum in the year 1973. A team of conservators under the supervision of Sri Ashok Das led the conservation work of the boat", Das informed.

"The boat is an important cultural property of Assam and reflects the rich Vaishnavite tradition of Majuli while the natural History gallery displays the flora and fauna of the state and its rich biodiversity" - Y. S. Wunglengton, Director of Assam State Museum.

A book release programme was also organised in collaboration with Sarat Chandra Sarma Prachyatattva Adhayan Kendra where the book "Mahabharata : Vision and Illumination" was released by the Vice Chancellor of Cotton University Prof. Bhabesh Chandra Goswami and the galleries were inaugurated by Secretary of Cultural Affairs Department, Smt. Madhurima Barua Sen, IAS.

Prof. Goswami in his speech emphasised on the importance of museums in a society and asked the students to actively participate in the events at the museum. He also delivered an elaborate speech on Mahabharata. Students from Cotton University participated in the programme.