It is really annoying that Assam’s border disputes with its four neighbouring States, Mizoram, Nagaland, Meghalaya and Arunachal Pradesh,   still continue even in this era of globalisation. But the bickering states should understand that inter-State development is possible only if they far from doing so over boundary, and without further delay come forward to resolve the contentious issues among themselves amicably and with a give-and-take spirit. Our impression is that if the decades-old nagging problem is clinched once for all, the most-elusive peace and harmony will prevail along the disputed borders that are all the more essential for facilitating Inter-State trade and Commerce and the success of the Act East Policy.

But the important question is, why is it not materializing as of now, even after the boundaries of Mizoram, Nagaland, Meghalaya and Arunachal Pradesh – the four States carved out of the composite Assam decades ago were well-defined constitutionally? Studies reveal that in the initial years of their formation, there was so far no report of any untoward incident taking place along Assam’s borders with these neighbouring states with the miscreants forcefully intruding into Assam’s territory to encroach upon patches of its land or involving into any pitched battles or skirmishes for encroachment in Assam’s border areas turning into a scene of battlefields resulting in the death of innocent people.  But after a little while, the situation along Assam’s borders with these states of the Northeast continues to be volatile due to unprovoked violence as indulged in by the miscreants from these states, in the form of depredations, armed clashes etc; in the disputed areas for encroachment, with the ordinary people facing the brunt of it. 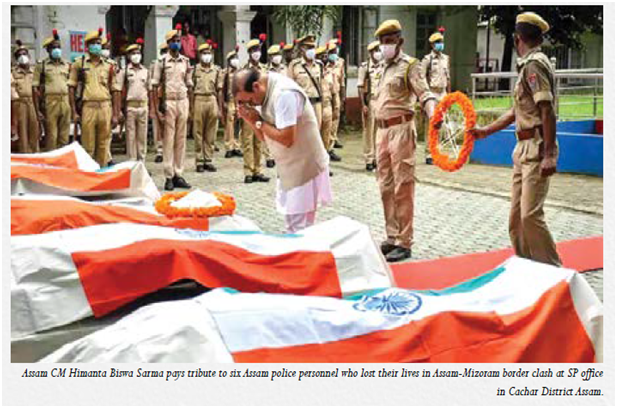 Arguably, the Naga People’s Convention leaders (NPC) went to New Delhi with two demands in 1959. One was the incorporation of the 16-point demand they had placed before the Prime Minister Nehru in July 1960, when the NPC leaders also sought upgradation of the “Naga Hills & Tuensang Area” (NHTA) – then an autonomous territory—to the status of a full-fledged State. Agreeable to grant Statehood, Nehru, presumably did not immediately accept the NPC leaders’ demand with regard to the new emerging state’s boundary. Finally, at the request of the NPC leaders, the boundary demands were kept pending for future consideration. The Nagaland State formally came into being in December 1963, but the Naga leaders apparently, did not like to abide by their state’s “constitutional” boundary corresponding to the 1925 Notification. Nor did Phizo’s Naga National Council (NNC) accept it. What NNC did want is incorporation of all the contiguous Naga-inhabited regions inside and outside India and other adjacent areas which were supposed to be parts of the old, undefined Naga territory prior to the 1925 Notification in Nagaland. With their demands remaining unattended to, Naga encroachments, and depredations in the Assam side of the constitutional border have been continually going till today since the armed clashes in the Kakodanga forest reserve in 1965.

Coming to the State of Mizoram, its narrative had begun when the Lushai Hills District of the hitherto Assam during the British rule became a Union Territory after the implementation of the North-East Reorganization Act in 1972 and attained Statehood only after the Mizo peace accord was signed by the MNF Chief Laldenga, the Union Home Secretary RD Pradhan on behalf of the Union Congress Government led by Rajiv Gandhi, and Lalkhama Chief Secretary, Government of Mizoram on June 30, 1986. In Assam’s Barak valley, three districts, Cachar, Karimganj and Hailakandi, share about 165 km-long boundary with three districts of Mizoram: Kolasib, Mamit and Aizawl.