With the ruling BJP wresting two Lok Sabha seats in Uttar Pradesh from the Samajwadi Party in a bypoll, Chief Minister Yogi Adityanath said BJP's "double engine government" has secured "double victory" in UP. People have sent a message that they are not ready to accept dynastic and casteist parties, those who incite communal tensions and criminals. 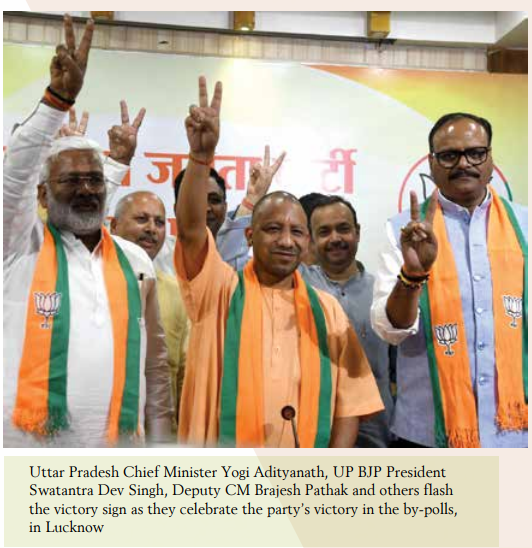 The Chief Minister said the BJP's "double engine government",  dispensations of the same party at the Centre and in the state has secured "double victory" in the state under the leadership of Prime Minister Narendra Modi. Addressing a press conference at the state party headquarters in Lucknow, Mr Adityanath announced that BJP candidate Ghanshyam Lodhi won from Rampur and Dinesh Lal Yadav 'Nirhau' from Azamgarh.

Obviously, the results of by-elections have given a signal about the outcome of the 2024. BJP's Bypoll Win in Uttar Pradesh is a Message to dynastic, casteist parties: Yogi Adityanath opined.

"The results of by-elections have given a signal about the outcome of the 2024 general elections," the Chief Minister added. The bypolls in Uttar Pradesh were necessitated by resignations of Samajwadi Party Chief Akhilesh Yadav and party leader Azam Khan from Azamgarh and Rampur seats, respectively.