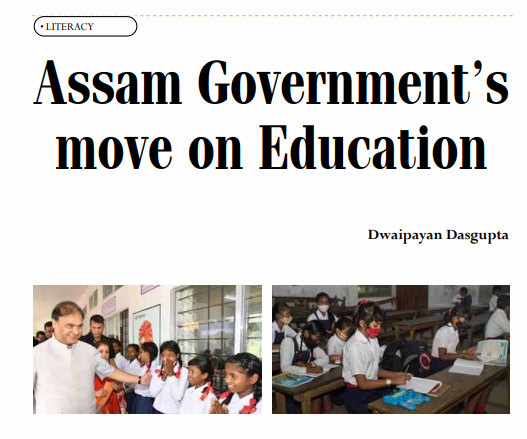 There are several problems in Assam which need immediate solution in the State because they have over the years troubled its people. These issues are mostly age-old and, therefore, have become cliched in the media, as have been floods and soil-erosion. No wonder, they will continue to be so till a long-term solution is found out, in spite of their losing importance. Now-a-days, however, one single but critical issue that has been the much talked about topic in Assam is the recent announcement of the current incumbent State government to begin teaching the two royal subjects – Mathematics and Science – to Class 3 in English in the Government schools. The news has naturally led to an academic debate.

Whether or not, it has been a well-considered decision, the fact of matter is that people are divided over the government’s reported move with regard to teaching Maths and Science in English medium. When one group is of the opinion that the adoption of this methodology will go a long way in giving children from Assam a much-needed competitive advantage, others are apprehensive that this may rather lead to a negative impact on education in Assamese.

The vital question: if teaching the two subjects in English will have such an effect or not is a phenomenon difficult to infer at this stage; of course, from the government’s recent announcement, what is discernible is that it has two main objectives behind it. One is to reduce the passion among parents to get their children admitted into private English-medium schools. If it is checked to some measure during every academic session, several government-run vernacular-medium schools can be expected to be saved from a possible closure due to poor enrollment of students, for there is a report appearing recently in a section of newspapers in Guwahati suggesting that there is a likelihood of a large number of schools in the State which has very less students’ enrollment and the schools which have performed miserably in the HSLC examination being amalgamated/merged in the future.

Another reason behind the State cabinet’s move to begin teaching Maths and Science in English, as one understands, seems to enable the students in the vernacular-medium schools to acquire proficiency in both English speaking and writing. There is no gainsaying the fact that in this era of globalization, the importance of English be it in our academic or professional or even social lives, whatsoever, is immense, especially in job market, a fact widely acknowledged by all. After all, it is an international link language. Any fresh graduate, of any stream, arts, science, or, engineering, who is proficient in English, can be expected to stand a fair chance of getting a relatively better employment in today’s job market. It is because of this reason that parents are enthusiast enough to impart good English education to their children, which they believe can be possible only in English-medium schools. Which is probably, why there are many who are ready to pay even a hefty amount for private english-medium school if that assures their children good skill in English. Hence, there is a rush for English Education in privately-run English-medium schools.

To read the further articles please get your copy of Eastern Panorama September issue or mail to contact.easternpanorama@gmail.com