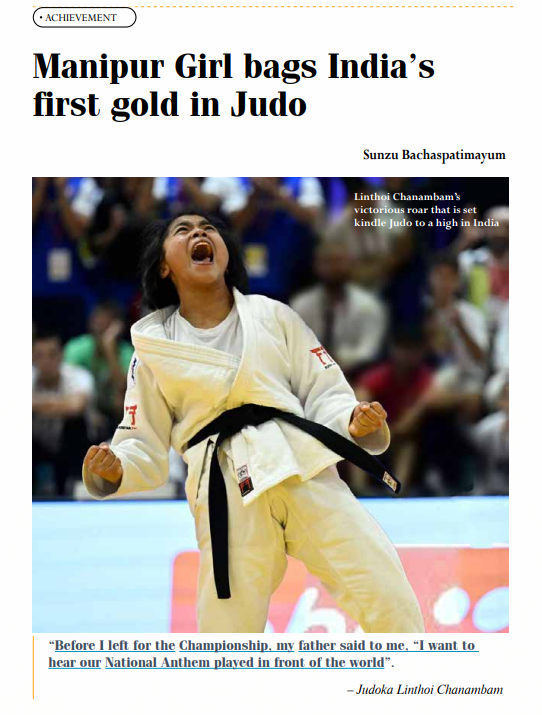 On 26 August in Sarajevo, Bosnia, Linthoi Chanambam defeated Brazil’s Bianca Reis in the finals of the women’s 57kg category, to clinch the gold at the World Cadet Judo under-18 Championship. Not only did she fulfilled her father’s wishes but scripted history as well by becoming the first Indian to win a world title in Judo in a tournament across all age groups for the country. Linthoi celebrated her 15th birthday on 31 December 2006.

‘My father is a farmer and my mother a housewife. I am the second of three sisters. Because there was no male child in the family, I always felt like a boy. All my childhood friends were boys and I always competed with them. I always wanted to be number one’, Linthoi narrates of her childhood days in Manipur’s Mayang Imphal village, 30-kms off Imphal, the capital of the State.

Asked whether she was nervous before the final bout, Linthoi explained, ‘My battle is on the mat and never in my head. I felt if I’ve put in the right amount of training, then I can be confident on the mat. And I’ve trained hard for five years for this. So there was no question of being nervous. I was raring to go all out’.

Linthoi’s coach, Mamuka Basilashvili recalls when he was a part of the talent identification development programme to spot out talented judokas from all over India. ‘It was 2017, during a talent hunt in Manipur that I spotted Linthoi who was just 11 years old then. I was surprised to see the passion people have for the sport there in Manipur. The first time I saw her, I instantly knew that she had something in her to become a world class athlete, although she was very young then,’ said Mamuka.

He went on to say that, ‘as a coach, you want to start training an athlete from a young age. It is easier to mold them. It really worked for Linthoi. She proved it big time’.

Explaining how she took to Judo, Linthoi said, she got into the sport just like everybody else in her village by enrolling for the one-month free residential Judo coaching camp in 2014 at the Mayai Lambi Sports Academy, located a stone throw away from her house. It was only later that she realized that Manipur has a strong tradition of Judo. Linthoi started training at the Inspire Institute of Sports (IIS) in Bellary in October, 2017. The last five years have been intense training under Mamuka.

Just like her idol - Judoka Majlinda Kelmendi from Kosovo – who became the first Kosovan to win gold in the women’s-52 kg category at the 2016 Rio Olympics, Linthoi hopes to become the first Indian to win an Olympic medal in Judo.

To read the further articles please get your copy of Eastern Panorama September issue or mail to contact.easternpanorama@gmail.com