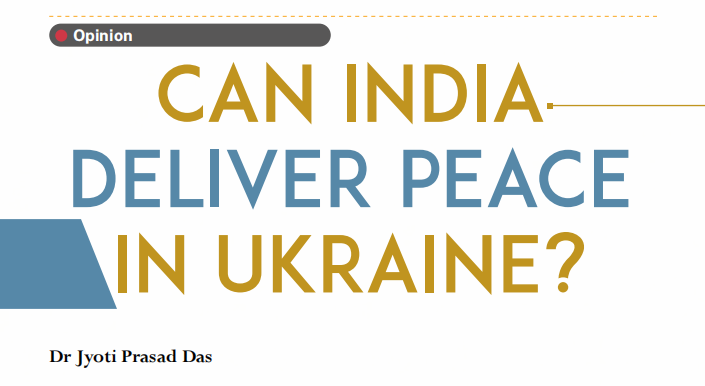 In her final appearance on 13 July 1917 at Fatima in Portugal, Mary had asked for the consecration of Russia to Her Immaculate Heart to stop Russia from spreading “its errors throughout the world and fomenting wars”, for peace to prevail on earth. On 25 March 2022, a month into the Russian invasion of Ukraine, Pope Francis consecrated Russia to the Immaculate Heart of Mary, alongside Ukraine. Nine months have passed by, but still an end to the war is nowhere in sight, and an era of peace on earth looks even more remote.

The Vatican’s foreign minister, Archbishop Paul Gallagher, had in November reiterated the Holy See’s offer to act as a mediator, based on the neutrality of the Catholic Church, given that both Ukraine and Russia are predominantly Orthodox. The possibility of negotiations was also discussed at the G20 Summit held in Bali, Indonesia. But despite efforts by the world’s religious and political leaders to mediate between Moscow and Kyiv, neither side seems to be looking at peace talks for now.

Zelensky believes that Russia might seek a “short truce” merely to regroup after the recent loss of Kherson to the Ukrainians. He is also unwilling to engage in peace talks while Putin is in the Kremlin. Putin, too, may no longer be keen on peace parleys after Angela Merkel revealed to the German Newspaper ‘Die Zeit’ on 7 of December that the 2014 Minsk Accord was only a stalling tactic that allowed the West to turn Ukraine into an anti-Russian proxy, by arming and training its troops for an inevitable war. Peace talks at this stage would only help Ukraine (and Europe) to pass through the winter, rebuild its infrastructure, recoup its losses, and prepare for a spring fightback. Putin said that Merkel’s remarks on the Minsk Accord only shows that launching the ‘special military operation’ was the right decision. Earlier, Kremlin spokesperson Dmitry Peskov had made it clear that for peace talks to begin, Kyiv must show the political will and readiness to discuss demands already made by Russia.

For peace talks to begin, the territorial issue is a major hindrance. Despite the retreat of its troops to the eastern side of the Dnieper River, Russia continues to insist that Kherson is Russian territory. Russia’s intransigent behavior will only keep Zelensky away from exploring a negotiated settlement, since he has been vocal about the withdrawal of Russian troops from the occupied areas. Russia will not loosen its hold over Donbas or Crimea, and if Ukraine tries to retake them, Moscow might resort to launching a tactical nuclear strike. Putin has recently floated the possibility of abandoning Russia’s “No First Use” nuclear doctrine, which could open the way for a Russian First Strike.