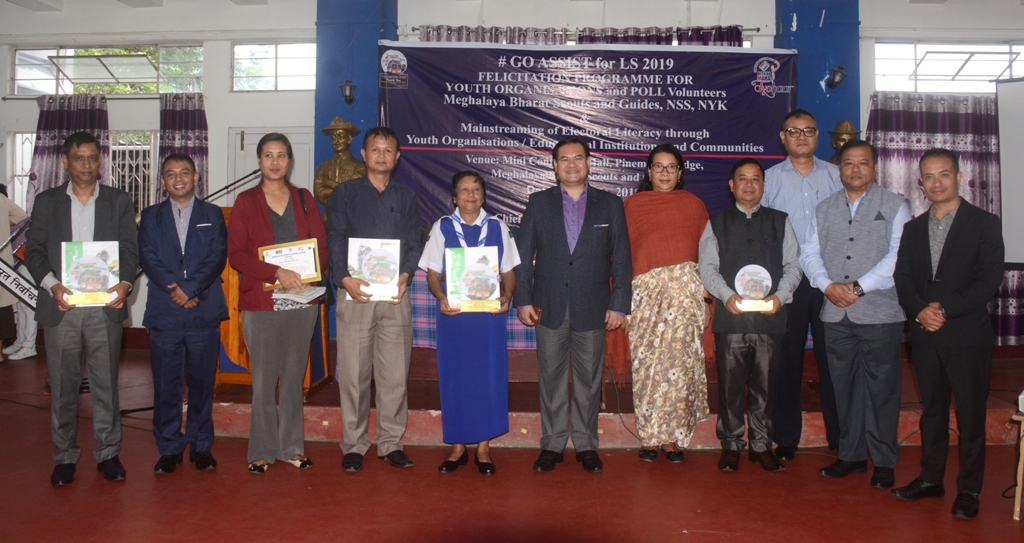 In recognition to the contributions made by poll volunteers in the Lok Sabha Elections 2019, the office of the Chief Electoral Officer (CEO), Meghalaya today felicitated the youth organisations of Meghalaya Bharat Scouts and Guides (MBSG), NSS and NYK at a function held at the Mini Conference Hall, Pine Mount Ridge.

The Chief Electoral Officer, in his speech, said that deployment of poll volunteers during the Lok Sabha Election has been a successful experience for our young boys and girls who enthusiastically took part in the poll process where they provide and assist the voters especially the persons with disabilities, pregnant women and senior citizens. The combined efforts of these poll volunteers have resulted in a huge percentage of voters’ turnout, he said.

The Joint Secretary, Social Welfare, Smti. C Kharkongor thanked the youth organizations for assisting and facilitating PWDs, weaker sections of society, pregnant women and old people through set up of help desks and offering temporary railing to physically challenged persons and old people. She said that their involvement is a motivation for the voters to turn out in huge numbers to exercise their franchise. 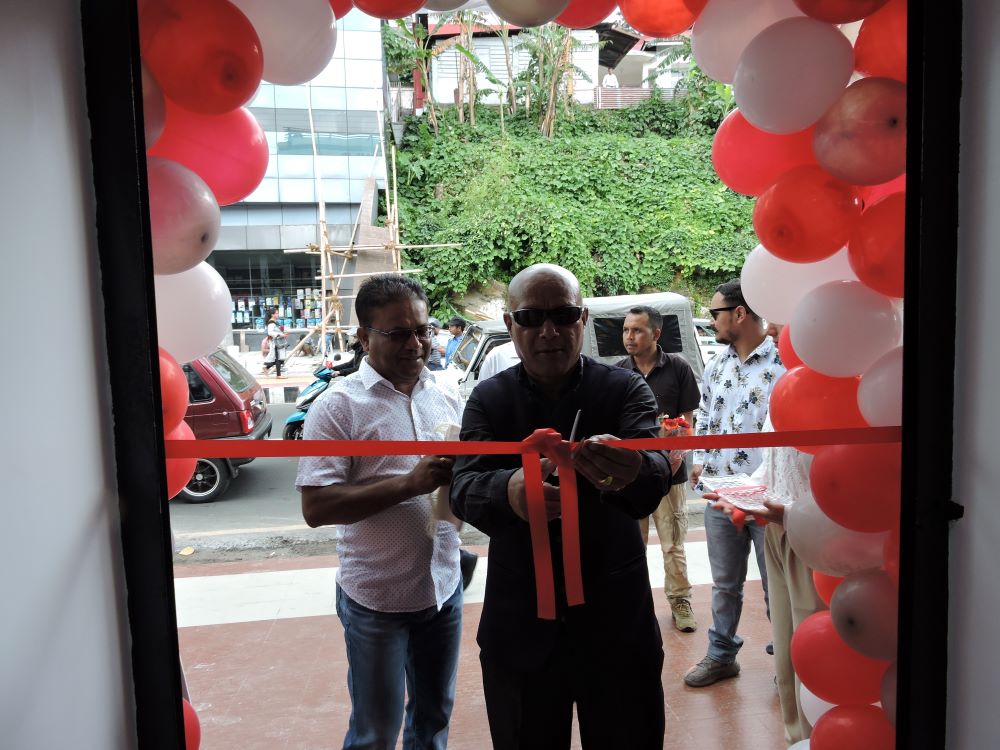 Sony India today inaugurated it’s first ever Sony Center in Shillong. The inauguration program was attended by local MLA Sanbor Shullai. The Sony center spread across 1,300 square feet, owned by Mr. Samuel Dkhar exhibit the complete range of Sony products across categories such as television, digital imaging, and consumer audio-video as well as accessories. The showroom is located in the Gems Arcade, Dhankheti Malki.

Speaking at the inauguration, Mr. Satish Padmanabhan, Sales Head, Sony India, said “Shillong is an important market for us and we are extremely thrilled to inaugurate our first Sony Center in this beautiful city. The consumer electronic industry has seen strong growth, with consumers gravitating towards Sony’s innovative offerings for the best experience. To cater to the consumers demand in a better way, we have launched this Sony Center to provide holistic, premium experience to the customers before making an informed purchase. We are confident that the new center will be appreciated by our customers and will help to further boost the sales.”

Mr. Samuel Dkhar, Owner, Sony Center, Shillong, said “We are delighted to launch not only Shillong’s but Meghalaya’s first ever Sony Center in the city. With this center, we aim to provide a seamless and personalized experience to our customers. The center will be one-stop destination for all of Sony’s premium products and services and we are confident that our customers will have a unique shopping experience at our store.”


A. L Hek assures help to genuine non-tribals about for license

Meghalaya Health Minister A. L Hek today met the Executive Member in-charge Trade of Khasi Hills Autonomous District Council (KHADC) Paul Lyngdoh to clarify the reason on why some shops in Nongmynsong were closed down by the Council. The Health Minister said that the council has closed the down the shops run by non-tribals because they were not able to provide authentic trading license issued by KHADC during the surprise checking by KHADC.

AL. Hek said that the Council has given the shop keepers one week time to provide proof regarding their trading license. ‘Being their representative it is my responsibility to go and meet the EM to clarify the reason for their closing and help out those genuine non-tribals who have been residing here and practice trade for many many years” A.L Hek added. He concludes that genuine shop keepers should get assistance from all departments when it comes to issuing them trading license from the council.

The first Advisory Council meeting held today discussed several meaningful issues relating to the conduct of the event and several useful suggestions have been noted and will be acted upon by the partners. This will be the first event of its kind being participated in by SIAL in the Northeast, and the state seeks to emerge as a food processing hub for the whole north east as well the other south-east Asian countries, in times to come. The SIAL feels it to be a big movement forward in generating awareness and building networks relating to the food sector in the region and commits itself to the successful conduct of the event in December 2019.

The partners are happy and proud to announce that a new chapter in the history of food processing and the food service industry of Meghalaya and the North East has been opened and hope that it will unleash new energies in the region. Through this partnership it is sought to bring together, showcase and introduce the food and food products of the North East to the Global audience.

The partners believe that the North East Food Show will be a unique opportunity for both Meghalaya and the entire North East region, to reach out to the global community, create international platforms for food business, new markets for unique food products which are native to the region, access to new technologies and unlocking overseas marketing opportunities for the farmers of the North East. The Food Show will also be an occasion for the Tourism and Hospitality Sector to expand further. The partners commit themselves to make this unique North East Food Show an unparalleled success. 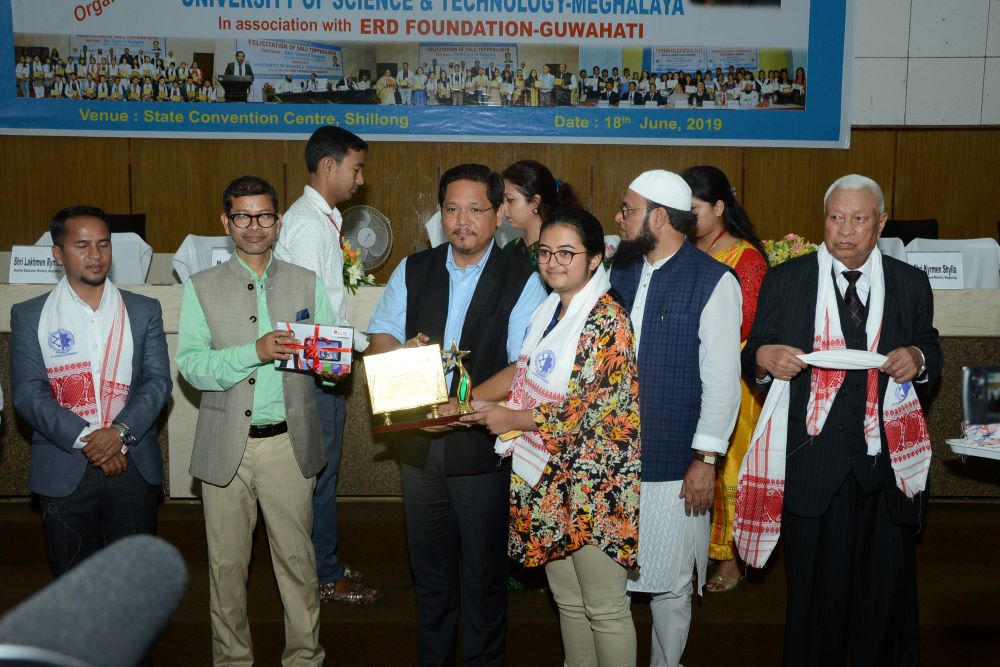 Delivering his speech, Chief Minister, Conrad K Sangma congratulating all the rank holders and commending their hard work said that it was a happy and proud moment for all. He added that it was great to see that the toppers are from all parts of the State. “While we are celebrating the success it is also important to see the other side which is not so pleasant,” said the Chief Minister rueing the large number of students who did not get through the SSLC and HSSLC examinations. He added that average pass percentage that leaves about twenty five thousand students unsuccessful every year is one of the biggest challenges for the government. He said that this trend which has been going on for the last couple of years is something that calls for concern and focused attention. “The youth is the largest human resource that will run the State and the country and having educated and qualified workforce will ensure having a society that is productive and efficient,” he said. He urged the toppers to follow their passion but at the same time to be good and humble human beings.

The Chief Minister also commended the gesture of recognition shown by USTM. Thanking USTM for honouring the rank holders, he said that institutions like USTM have a big role to play in research and development which will further contribute to policy making.

Speaking on the occasion, Minister, Education, Lakhmen Rymbui said that the hard work, perseverance and dedication of the students along with the support of the parents and teachers have helped the students to achieve success. He urged the toppers to continue their hard work and aim for those spaces in which the State is lacking as in Indian competitive examinations to bring glory and honor to the State. He also appreciated the initiative of USTM to recognize the hard work of the students. The Chief Minister and other dignitaries presented the toppers with laptops, digital tablets, mementos and citations.

Earlier, welcoming the gathering, Mahbubul Hoque, Chancellor, USTM, said that the university is committed to the development of Science and Technology education and research in the region and announced that USTM is offering free education to all the toppers of MBOSE after they pass higher education. The programme was attended by Minister Education Lakhmen Rymbui, Minister, Revenue & Disaster Management Kyrmen Shylla, Adviser to the Government, D. D Lapang, School Principals, parents and guardians.