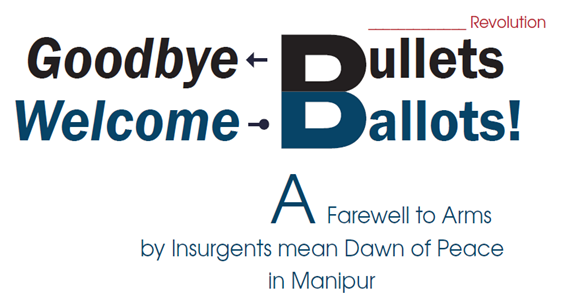 Even the most avid readers of newspapers often miss some small news that tells the tale of major transformations. Many among us might have overlooked a news-piece "41 Kuki National Front cadres voted in 2019 polls”.

The news appeared almost in all dailies of India. Yet chances are that the people may not have attached much importance to it. In fact, they cannot be blamed. How does it really matter, if 41 people voted in a particular polling booth for the new Lok Sabha 2019 in Manipur? They are among the millions of voters. Hence, does it really matter?

It really matters a lot. This was a baby step towards a giant leap forward normalization of situations in Manipur facing insurgency crisis for decades. It also proves the Kuki National Front (KNF) now wants to bid farewell to arms to join the national mainstream closing the chapter of bloodshed in Manipur.

On April 11 2019, 41 KNF cadres smartly dressed in camouflage came at the Ebenezer Peace Camp, Natheljang in Kangpokpi Sadar Hills to cast postal ballots using their SoO Identity Cards. Before that, they staged a short parade led by their commander.

This is a very significant event towards bringing the insurgents in the construction of their state. The KNF is practically the mother organization of all Kuki militant groups. Naturally, their participation in parliamentary polls would influence all other insurgents of Manipur as a positive corollary effect.

Most welcoming it is that a spokesman of KNF even told the media persons at the Ebenezer Peace Camp that the cadres are very happy to vote. The spokesman very sweetly said “We are revolutionaries and belong to a revolutionary outfit. However, we feel great to cast the vote.”

In fact, the Centre and State government missed a great opportunity to utilize this Ebenezer Peace Camp opportunity as it could have attracted 200 members of KNF to cast the vote instead of just 41. The spokesman of KNF lamented that the Election Commission of India allowed only 41 cadres whereas 200 were willing to grab the opportunity to vote.

Since the militants of KNF were given the Suspension of Operation (SoO) cards, the Lok Sabha polls 2019 could have been used as a major platform to bring them closer to the national mainstream.

But our governments, the Centre and States, at times act erratic, missing chances to change negativity of a section of misguided people into positivity. But this is India. Acting politically erratic is a major of poetic justice in India.

Just imagine, if the government had issued permission to 41 KNF cadres to cast postal ballots, it could have jolly well allowed 200. It would have given a far more positive message to the masses of Manipur, particularly to other militants. The voting by a large number of insurgents would certainly have propelled other insurgents to act positive, ultimately leading farewell to arms by them.

According to the EC, there are 2881 cadres of different militant groups under SoO in 32 camps spread across Churachandpur and Chandel districts of Manipur. Most of them are registered, voters. Had they been given the opportunity to vote, it really would have ushered Manipur in the road to peace.