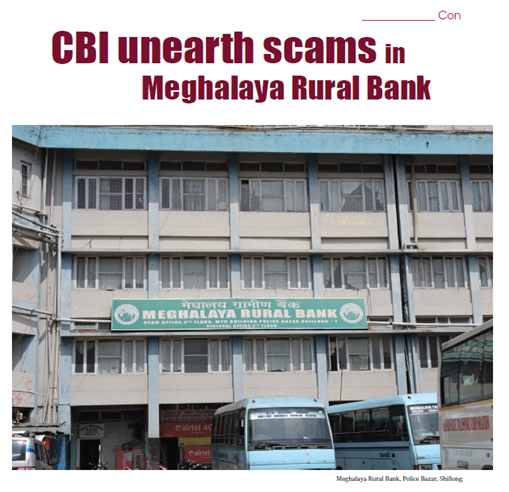 The Central Bureau of Investigation (CBI) Shillong recently conducted raids in and around Shillong in relation to allegations of a major scam involving the Meghalaya Rural Bank(MRB) amounting to Rs. 14.34 Crores. The CBI conducted few raids after it got the information from General Manager of Meghalaya Rural Bank, Shillong in compliance with circulars which dated back to 1st July 2016 and 20th September 2017 issued by the Rural Bank of India and National Bank for Agriculture and Rural Development (NABARD) respectively. In the complaint, the General Manager requested the CBI, ACB, Shillong to register an FIR in the matter of fraud detected during an internal inquiry conducted by the Bank. Hundreds of uneducated farmers from more than five villages were cheated by the Bank and few so-called educated individuals.

The first case of fraud in Meghalaya Rural Bank came into limelight on May 2017 when around 40 people from Mawkynrew Village in East Khasi Hills alleged that the Branch Manager of MRB Smit. A. Kharmuti, Sordar of Mawiapbang Mr. Kyrshiej Nongrum, and a woman named Timil Pyngrope persuade the people to open up new account in Smit for agriculture and other benefits from the Central Government by paying 500 to 10,000 rupees to the Bank. The villagers alleged that there have been numerous occasion where money was being withdrawn from their accounts without their notification. The aggrieved villagers from Rapleng, Laitdiengsai, Jongksha, Mawbeir and Mawiapbang village has further expressed concern over the slow progress of the arrest of any fraudster since May 2017. The main accused also has not been arrested, though the FIR was filed on May 2017 against the trio.

Highlighting the plight of the villagers, one of the victims of such fraud, Abrington Dkhar a resident of Mawiapbang village said “most of the villagers belong to poor families and are only dependent on farming and the Sordar had asked to open an account at Meghalaya Rural Bank in Smit, so that I will be able to receive a grant of Rs. 10000 under a central scheme, however till date am yet to receive the grant but instead I have learned that a load of Rs. 2.5 lakhs have been taken under my name.” He informed that during the opening of the account, the Sordar of Mawiapbang, Kyrshiej Nongrum, A. Kharmuti, branch manager and another woman by the name Timil Pyngrope was also present and had asked to sign the documents. He further informed that on May 5, the affected villagers in the alleged fraud case have given their statement in front of the Meghalaya High Court.

More than 150 people from the five villages in Mawkynrew constituency have been cheated by the trio. Another victim R. Mylliempdah said, “We have given our statement in the Court on May 2017 but till date, no justice. She further demanded the immediate arrest of all those people involved in dragging them in the fraud case because even before the signing of the documents they had told us that it was a grant and not a loan. The headman of Jongksha Village informed that around 150 people have been duped by the trio and the combined loan amount has touched Rs. 3 crores