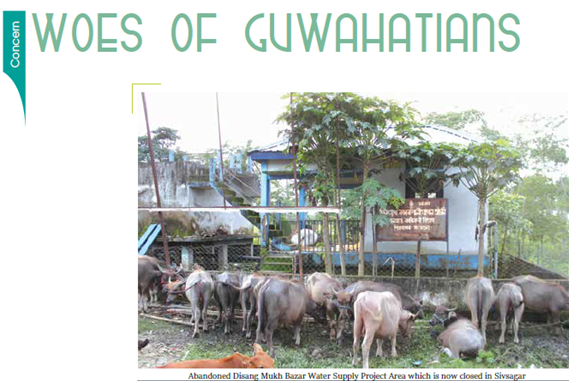 Nestling on the edge of the mighty river Brahmaputra flowing majestically along its entire stretch of land in its north with its charming rugged but greenish hills, of course, of moderate height, as those magnificent hills all around Pune, encircling almost its four sides, adding to its beauty, Guwahati was literally a small, somnolent, nondescript town till the late sixties.

Naturally, its municipal area, no wonder, was too much small both in its width and length with Ulubari-Rehabari-Sarabbhati in the south, Chatribari-Atgaon-Kumarpara-Bharalumuk in the south-west of Guwahati, and areas in Fancy Bazar-Panbazar-Uzanbazar on the bank of the Brahmaputra to its north. To the east, its jurisdiction expanded only up to Chandmari from Gauhati club. And, interestingly enough, from Ulubari up to Ganeshguri, there was vast land measuring hundreds of thousands of bighas lying along both the flanks of the oldest G S road, being partly marshy and partly cultivable.

During winter when parts of this marshy land dried up, students from different schools say, Ulubari, Panbazar, Paltanbazar, Silpukhuri etc; used to go to the State zoo on the R G Baruah road on educational excursion along with teachers by walking through this vast stretch of fertile land. The entire region itself was then essentially a vivid mirror of a true countenance of Guwahati, an image that had projected its true quasi-urban character.  At that time, its population was barely two lakhs, and, it had no sound network of transport and communication, with which Guwahati could be linked to all the major cities of the country.

However, Guwahati has over the past few decades expanded beyond recognition with ever-growing migration of the people not only from within different corners of Assam but also beyond it, that has its well reverberation in the high-rise residential/commercial buildings emerging in umpteen numbers in every nook and corner of the city including flood-prone Tarun Nagar, Nabin Nagar, etc; thus replacing  the once existing  vast tract of water-bodies, paddy land between  G S road  and R G Baruah road.  All the multi-storied commercial buildings along the arterial roads including G S road and R G Baruah road, have housed big bazaars, swanky shopping malls replete with expensive garments, many other costly materials, beautification clinics, spas, hotels, restaurants offering sumptuous food, air-conditioned private, nationalised banks, private colleges and what not.

But what was the real spark for this rapid growth of the city?  It was the ceremonious shifting of the capital of Assam from Shillong to Guwahati in 1972  that was  indeed a turning point when large number of  all the State government employees and officers serving in its secretariat and various departments were transferred in one stroke and soon after,  many people including businessmen also moved to Guwahati and  purchased  land in different localities of the city, today known as prime localities such as Tarun nagar, Srinagar, Nabin Nagar, all incidentally belonging to that vast cultivable, swampy land,  at throwaway prices per kata, and, no wonder, some of those well-to-do and businessmen, purchased bigha after bigha land.

A casual visitor may be highly impressed with the extremely illuminating showrooms, shopping malls, ownership flats, imposing private-sector big hospitals and commercial establishments along both sides of G S road in the evening. But there are several basic problems in the city such as pure drinking water crisis, water-logging, pavements, road dividers etc, which may go unnoticed if one comes to Guwahati on a brief visit.

Arguably, let’s take up the case of the crisis of pure drinking water. Pure drinking water supply on a regular basis to each and every household is one of the basic daily needs of city-dwellers which authorities are supposed to meet. But in Guwahati, which incidentally is the only principal metropolis in the whole of the Northeast India, the story on this score is, depressingly, just the other way round. To argue precisely, there was a time, say around two decades ago, when the municipal authorities every day used to provide piped drinking water in both shifts, morning and evening, to the residents of almost all the areas in the city, including the old areas like Panbazar, Fancy Bazar, both prime centres of higher education, trade and commerce as well as family restaurants et al, Uzanbazar, Lachit Nagar, Ulubari, etc; to mention a few. But residents in some parts of Panbazar, Fancy Bazar, Lachit Nagar, Ulubari, of late expressed disillusionment with the authorities for their alleged failure to ensure regular supply to them as before.  If what they say the other day is construed to be authentic, then indeed there is a valid reason to feel dejected. After all, the Panbazar water treatment Plant is nearby. So is the huge Brahmaputra. In spite of it, the crisis still persists.

With regard to the supply of drinking water, however, the much more deplorable is the condition of the residents of some localities of Lachit Nagar, Ulubari, and Christian Basti on GS road. The scarcity of drinking water is not a recent vintage there. About more than one decade ago, when hundreds of families moved there to stay in multi-story ownership flats, at that time also, there was no drinking water supply system. So to provide them drinking water, builders in these areas set up bore-wells in their respective societies.