Tripura tied over the non-entry regime of prestigious Padmasri award after 26 –years this time with the change of power in the state. Centurian Thanga Darlong, the last tribal musician to play Rosem – a bamboo-made flute-like musical instrument was awarded fourth civilian honour Padmasri along with 93 others in 2019. Tripura’s name appeared in the Padmasri list after 25 years with the recommendation of the state govt. In 1992, internationally acclaimed surgeon Dr Rathin Datta was conferred with Padmasri for his contribution in 1971 Bangladesh Liberation War following the recommendation of the then Congress-TUJS government. 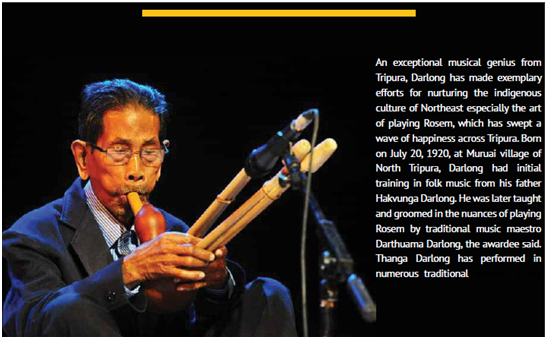 Tripura ran dry for two and half decades during left front rule. The left front government had proposed to confer Padmasri to a communist leader like Dasharath Debbarma but it was turned out by the juries. Thereafter, the communist government decided not to recommend any more name out of agony despite repeated demands from cross-sections. However, after BJP-IPFT government came in power, the state government recommended Darlong for conferment of the award in the category of ‘centenarian’ for contribution in flute-based music.

An exceptional musical genius from Tripura, Darlong has made exemplary efforts for nurturing the indigenous culture of Northeast especially the art of playing Rosem, swept a wave of happiness across Tripura. Born on July 20, 1920, at Muruai village of North Tripura, Darlong had initial training in folk music from his father Hakvunga Darlong. He was later taught and groomed in the nuances of playing Rosem by traditional music maestro Darthuama Darlong, the awardee said. Thanga Darlong has performed in numerous traditional festivals of his community since childhood. He is also considered the most accomplished performers of Rosem ever. With the advent of modern musical instruments and penetration of digitized music in the villages, traditional art and culture forms are near extinct. He has also mentored a large number of young indigenous protégés in the art of playing the instrument. Earlier, in 2014 he was accorded Sangeet Natak Akademi Award for his contribution to the preservation of indigenous music. A large number of young people of his community have been trained by him who has given dedicated work in preserving and promoting the traditional instrument. Together with the members of his troupe, he has travelled widely within the country and abroad including Japan over past a decade. Tripura government had honoured him in the state folk musician category with Atal Bihari Vajpayee Life-Time Achievement award.

Tripura government has faced an embracement with the report of a family dispute that prevented Padma Shree awardee Darlong to fly Delhi in attending award receiving ceremony. Thanga, a hardcore Jhumia (shifting cultivator) could not manage to travel to Delhi. After 25 yrs, BJP-IPFT government had persuaded for Darlong of to accord fourth highest civilian award for his unique performance of Rosem. He is the last tribal musician to play Rosem – a bamboo-made flute-like musical instrument, which is made of seven bamboos and with a dry gourd. The invitation to attend the award giving ceremony had reached to Darlong through state government but the officials did not follow it up. Darlong had received a handsome amount of money from several government and non- government organisations as a gesture of goodwill for his contribution to the folk music in the state after being nominated for Padma Shree but that day he was empty handed.