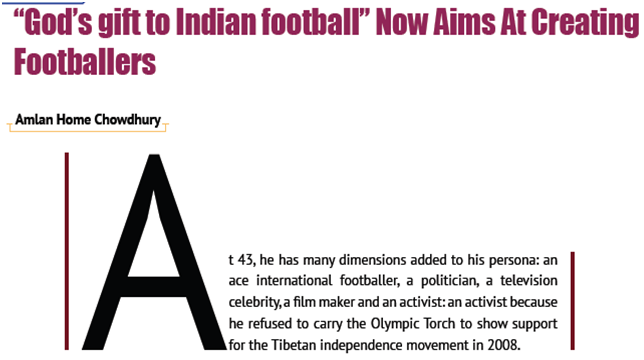 At 43, he has many dimensions added to his persona: an ace international footballer, a politician, a television celebrity, a film maker and an activist: an activist because he refused to carry the Olympic Torch to show support for the Tibetan independence movement in 2008.

Yes, we are talking about Bhaichung Bhutia. He makes Northeast India proud. He is one of the most glorious sons of Sikkim. He is also known as the “God’s gift to Indian football.” Bhaichung is a living football legend of India.

Some persons attain fame at an early age. Bhaichung is one of them. Born on December 15, 1976, he signed contract with the English club Bury in 1999. Bhaichung, beginning his career with Kolkata’s East Bengal Club, is the first Indian footballer to sign that prestigious contract.

Bhaichung was born Tinkitam in Sikkim. He is nicknamed as the Sikkimese Sniper as his skill of shooting the football virtually resembled a sniper’s bullet: hitting the bull’s eye: the goalpost. He won many awards including the Arjuna Award and the Padma Shri.

In August 2011, Bhaichung announced his retirement and played his farewell match on January 10, 2012 in New Delhi’s Jawaharlal Nehru Stadium against the Bayern Munich of Germany.

What was he doing, we mean, after retirement?

One of the most popular figures in Sikkim, Bhaichung is a great supporter of the Tibetan independence movement. This, certainly, can act as a major political platform for him.

Joining the Trinamool Congress and unsuccessfully contesting the Darjeeling Lok Sabha seat in 2014, Bhaichung left the party in 2018. He floated his own Hamro Sikkim Party subsequently. And the slogan of the party is: “Hamro Sikkim, New Sikkim.”

Bhaichung recently told the media that he is going to fight against the corruption, unemployment and use of alcohol and drugs by the youth. He openly says the governance in Sikkim is not at all good.

He wants the Hamro Sikkim Party a very big platform for the youth apparently indicating to replace the leadership by the old by the young. Interestingly, Bhaichung is aiming at bringing the sports people into politics: something that no other leader has ever done in the country.

Bhaichung captained the Indian footballers for long. Now it remains to be seen how he captains the politics in Sikkim.

As a television celebrity, Bhaichung is really doing the rounds in India. His appearance in the Kapil Sharma Show created a major flutter with the youngsters liking it much. He had also won the reality television show Jhalak Dikhhla Jaa.

The director Anand Kumar is going to to a biopic on him: some sort of a real-life story that would inspire the youth. Recently commenting on the biopic, Bhaichung said he does not want it to be full of “masala” like some other Bollywood biopic.