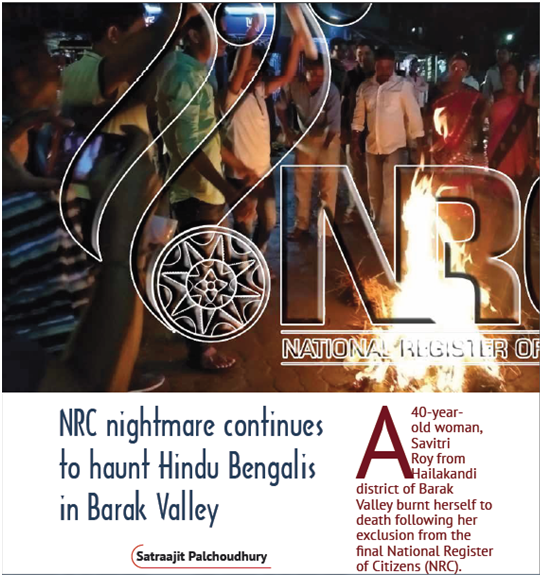 A 40-year-old woman Savitri Roy from Hailakandi district of Barak Valley burnt herself to death following her exclusion from the final National Register of Citizens (NRC).

This shocking incident took the Southern tip of Assam by storm. Savitri was based at Station Road. “We submitted all the documents to NRC authorities. We have our names in the voter’s list of 1966. We have been staying in Hailakandi for decades. Still I fail to understand, why the authorities chose to scrap the name of my wife,” said Debabrata Roy.

“Savitri was from Tripura. It’s true that her name didn’t appear in the draft NRC. Despite this we were hopeful of proving her Indian citizenship because we used the 1966 voter’s list as our legacy data,” said Savitri’s mother-in-law Mira Roy adding, “Savitri was very tense and the fear of detention camp was haunting her. We did try to boost her morale. But nothing helped. She chose to leave behind her husband and a 13-year-old daughter Deepika in this world alone.”

However, the amazing part of the tale is that barring Savitri, her husband and daughter’s names appeared in final NRC. Now, the question arises how come Savitri be treated as an ‘intruder.’

According to a statistical detailing by an NGO—Barak Human Rights Protection Committee (BHRPC) as many as 32 people lost their life to NRC since January 1, 2018—the day after the first draft of NRC was made public.

Savitri is not the only housewife from Assam, who committed suicide due to NRC. A 32-year-old woman from Koliabar Rahima Begum—a resident from Borguli also walked the similar road following her exclusion from the final NRC, sources told.

A 65-year-old woman, Ahima Bewa from Bongaigaon also committed suicide. The list is endless and questions are aplenty—unfortunately so far the authorities concerned could not come up with a proper reply.

Veteran BJP leader Kabindra Purkayastha when asked about Savitri’s death said, “We are really sad to hear it. BJP has stated it umpteen number of times that it is committed to providing citizenship to the Hindu Bengalis, who had to settle in Assam following religious persecution in Bangladesh.”

“Many are of the opinion that NRC will solve all the burning political problems of Assam. In fact, I believe that NRC is the beginning of a new problem. All those who have failed to make it to final NRC did exercise their franchise in all previous elections. If you consider them as intruders, you will also have to question the credibility of all the previous elected lawmakers,” Sushmita asserted.

While interacting with Eastern Panorama, she also told that the time has come for all political parties to rise above petty party politics and clear their stance on NRC.

The final NRC has put the fate of 19 lakh applicants in jeopardy and this bunch of people will have to fight a long legal battle to prove their citizenship.

“Those who have been left out from NRC need not worry at all. Both the party and government are standing behind them. BJP has already cleared its position on NRC. Congress is rather playing cheap politics. It didn’t support us while passing citizenship bill in Parliament. These are all in public domain,” Roy told.

“We want the government to bring Hajela to book. It is due to his callousness many genuine citizens could not make it to final NRC. We will not accept anymore death over NRC row,” said Hailakandi Town Mandal BJP President Manab Chakraborty.