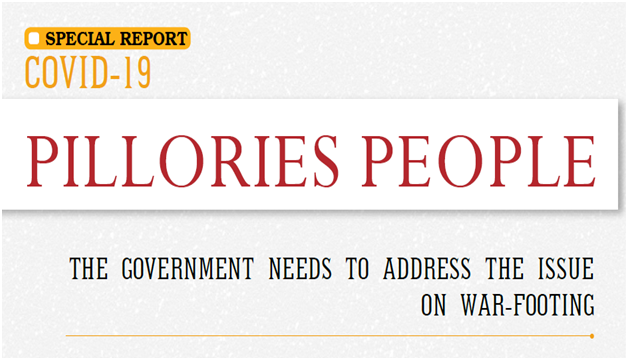 The Central Government, as well as the State Government has decided to lift the lockdown period from June 1, this year, following the Covid-19 pandemic that wreaked havoc all over the world, India notwithstanding. Bearing the walloping crisis in mind, the BJP-led NDA Government led by Prime Minister Narendra Modi, has announced a stimulus package of Rs 20-lakh crore to ameliorate the problem plaguing the people in general and for various other sectors in a systematic and orchestrated manner. The airports and flights, too, started functioning, with the resumption of both the national and international services. However, the public transport and cinema theatres, would resume their operations in due course in a phased manner.

However, hardly had the Union Government recovered to initiate the soothing measures to heal the wounds caused to the people for the post Covid-19 period, came a bombshell in the wake of the destruction caused by cyclone Amphan in West Bengal & Odisha. The Centre had allocated Rs 1,000 crore to West Bengal & Rs 500 crore to Odisha as initial assistance financially, with the West Bengal government sanctioning an additional Rs 1000 crore to repair the damage caused extensively in South Bengal districts like North & South 24-Parganas and Midnapore, that took the lives of as many as five lakh people. The Prime Minister promptly responded to the crisis when he flew with the West Bengal Chief Minister Mamata Banerjee for an aerial survey to assess the pathetic plight of the people in the state that has not witnessed such a mind-blowing crisis in the last five decades. The noted historian Boria Majumdar says, the damage inflicted on the people is much more than the 1,20,000 deaths occurred throughout the world in about three months time due to Covid-19 pandemic. Odisha, however, was not damaged to the extent like West Bengal, although parts of Bhubaneswar and Khurdah Road and their adjoining areas were affected.

Keeping the exigency of the Coronavirus crisis in mind, the Central Government has announced a stimulus package of Rs 20-lakh crore to mitigate the problem of the people from all walks of life, apart from assisting various sectors, especially the Agriculture, MSMEs and banks, including non-banking finance companies and other such ventures that were crying for attention. The industrialists in general, has hailed the government’s announcement and termed it as a worthwhile measure, which would augur well for the growth of Indian economy in the long-run. Rajiv Kumar, Vice Chairman of Niti Aayog event went to the extent of stating that the size of stimulus at Rs 20.97 trillion is larger than the promise made by the Prime Minister in his address on May 12, this year. He is also positive enough to remark that the attractive stimulus package would address both the demand and supply side of the economy. However, a section of opposition parties, including the Congress, vehemently criticised the Centre’s decision and felt that the allocation of the said sum as insufficient, considering the pandemic that has spread to the nook and corner of the country. The rebel Congress MLA from Uttar Pradesh, Aditi Singh, did not hesitate to blame her own party without batting an eyelid that it is the Congressmen, who made a mockery of bringing the students from Kota in Rajasthan with artificial promises, whereas the state Chief Minister has facilitate the process for the students with aplomb. It was not surprising, when the Congress suspended her later for anti-party activities.

Zoya Hasan, Professor, Emerita, Centre for Political Studies at Jawaharlal Nehru University in New Delhi, asserts that the government’s economic package is niggardly, based on minimal fiscal cost and minimum social spending, and  demanded an explanation from the government as why everything, ranging from repaying tax refunds to loans were included in the fiscal stimulus. She also wondered why the Centre did not permit direct cash transfer system for the migrant workers in the last two months when the PM Relief Fund and Cares Fund are not facing resource constraints. The professor concerned also had a jibe at the Centre, when she sarcastically remarked that the government might even consider a good monsoon as fiscal stimuli. It may be noted that the Prime Minister, often reminds the people about his “minimum government and maximum governance” mantra, but, as some economists argue, the immediate relief to the people is not more than one per cent of the Gross Domestic Product (GDP), and unless and until the Centre increases its financial allocation in the coming months, the package would not have a desired effect.

Some Trade Union leaders affiliated to the Congress, Left Parties, and DMK & Trinamol Congress are pained to note that India’s huge labour force, and, more so, the unorganised workers are the maximum sufferers during the lockdown period. Moreover, its repeated extension from March 25, this year, has caused economic devastation to workers in the unorganised sector, as it would deprive them the food, cloth and shelter. The union leaders aver that unemployment, if not underemployment problem went from bad to worse during the lockdown crisis and they are apprehensive that it will have a dastardly effect on the migrant workers for a longer duration. They also hastened to add that some states like Madhya Pradesh have decided to engage the workers for 12 hours a day, instead of the scheduled eight hours, to compensate for the loss of manpower during the lockdown period. Instead, they could have opted for engaging more labourers on shift basis at the scheduled hours, as that would also enable them to generate employment for the migrant workers, they reasoned.

A recent survey by the Centre for Monitoring Indian Economy states that about 140 million have lost jobs after the imposition of lockdown. It is being felt in academic, industry and political circles that the government could have provided adequate transport facilities to the migrant workers, who had the mortification of walking for hours together at late nights and wee hours to reach their destinations. Unfortunately, many fainted and some died while walking visibly tired, with sad sullen look and hungry faces. It was horrifying to read that many pregnant women had to undergo constant struggle and torrid-pounding, as many hospitals were not inclined to admit them, as the fear-psychosis owing to Covid-19 gripped the hospital authorities. A section of migrant workers did not even get adequate water to drink, which compelled them to use the water meant for toilets to quench their thirsts.

As on 27 May, India’s Covid-19 crossed the milestone of 1,50,000. Incidentally, the states registered 6,387 new cases in a day. The total number of Covid-19 patients in India increased to 1,51,767. While Maharashtra continued to report high number of cases, the Coronavirus infection surged in Tamil Nadu, where over 600 new cases emerged on the same day. The death rose to 170 within a day and the number of fatalities related to the virus infection in India reached 4,337 till date, as Maharashtra alone reported 60 deaths on 27th instant. Accordingly to the ministry of health and family welfare, there were 83,004 active Covid-19 patients in India. The recovery rate has gradually improved in the last few days, as over 42 per cent of the total cases were cured from coronavirus, highest so far.