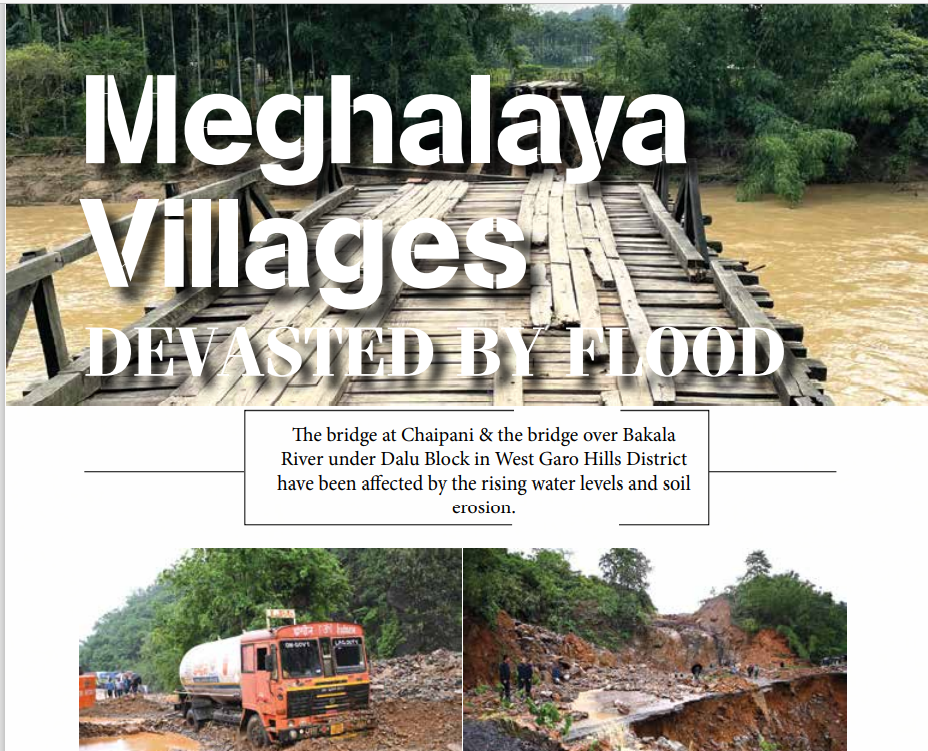 The Chief Minister of Meghalaya, Conrad Sangma was seen travelling by boat for hours to inspect the flood affected areas in Baghmara & Siju blocks of South Garo Hills and motivate the team to rebuild the villages of Meghalaya.  Conrad K Sangma visited remote villages such as Bolsal A’ding, Wagesik, Malikhona, Siju Dobakol and many others which were affected by the worst flood in the recent history of Meghalaya, it took him 10 km of walk through the slushy and hilly roads of Baghmara & Siju and risky boat ride in the fast-flowing stream to reach the affected villages in South Garo Hills.

The extent of damage and life loss is unimaginable and probably unknown till date as the team continues to restore connectivity and provide relief to the affected villages. Led by the honorable Chief Minister, Indian Air Force, Departments, Honorable Ministers and Communities are working hard to rebuild the villages and support the villagers.

In the mid of this month, rainfall records of Mawsynram and Cherrapunji was seen tumbling. While the State of Meghalaya celebrates its 50th Statehood year, the rainfall in June seems to overpass the last 50 years record in the wettest place of the earth. This has led to one of the worst flash floods, landslides and eventually floods in 8 districts of the State.

The entire State machinery led by the Honorable Chief Minister, has been tirelessly working towards restoration of connectivity of roads and bridges, providing relief to stranded and flood affected people, and rebuilding the State. A natural disaster of never seen before scale have devasted Meghalaya.

Indian Air Force choppers have come to the rescue of the stranded, there have been 13 trips since 17th June in Maheskhola, Nekora, Bandrasora and Rangthangsora in South Garo Hills  to airdrop 25-30 quintals essentials like rice, dal, Cooking Oil, Milk, Sugar, Tea, Blankets, Tarpaulin etc to the villagers. Several bridges have been destroyed, houses of villagers destroyed and landslides have damaged 38 roads that needs to be reconnected in the state which includes portions of National Highway, inter district roads and Village roads in East Jaintia Hills, South Garo Hills & South West Garo Hills districts of Meghalaya. NH62 from Rongdong to Baghmara connecting Siju has been severely damaged and would need time and effort to clear the debris. A similar impact was seen in NH6 near Lumshnong, East Jaintia Hills where towns were disconnected owing to massive landslides.