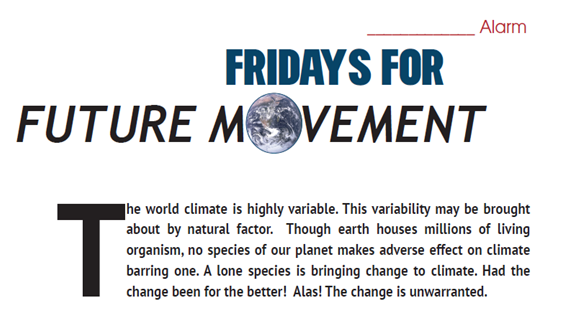 The change has the potential to spell doom. The species is none other than human being. It is indisputably true that for our planet this species has become a burden. It is stated that earth’s temperature has risen 1 degree Fahrenheit in the last century. And the past 50 years of warming is due to human activity. With the passage of time the load is becoming heavier. Some of our activities being antagonistic to nature are instrumental in bringing woes to earth. The woes are rise of earth’s atmospheric temperature. It has reached the alarming level. Rampant deforestation, (it is estimated that earth is losing over 150,000 square km of tropical forest every year).  Burning of fossil fuels like coal, natural gas and oil, decomposition of wastes in landfills have released enormous amount of green house gases into atmosphere.

The green house gas such as CO2 contributes about 50% to the green house effect. Forest and ocean are carbon sinks. So, loss of forests felicitates accumulation of carbon dioxide, because loss of forest means dwindling of trees to absorb CO2. It is stated that Amazon forest suffered loss over 120,000 square km forest in 1987. The result was atmosphere had to take the load of 5 million tons of CO2.  This emission has ended up in heating up the earth’s atmosphere. This gradual rise of temperature triggers global warming and climate change.

Yes, climate change caused by global warming has become a reality. This unwanted gradual heating of our planet on account of temperature rise is a stern warning to all that end is imminent unless concrete action is undertaken.

The unsafe and unprotected future waiting to clasp the humanity has banished the sleep of a school girl of Sweden. Greatly disturbed, she took to street demanding action to ensure a secured future for earth in August 2018. Greta Thunberg 16 staged sit-in outside the Parliament of Sweden against inaction on climate change. Even she skipped school in support of her demand. Initially, she found no taker. Her classmate showed cold shoulder to her. Her parents tried to dissuade. But, she stuck to her gun refusing to yield. Her voice of protest has spread and it has snowballed with the joining of students from different parts of the world. The demand of Greta to the lawmakers is to work in line with Parish Climate Accord to combat the climate menace. Since 2018, students have been demanding cut of green house gas emissions including framing of stronger environmental laws to combat climate change. Thus this teenaged climate activist has become all-important figure. In December 2018, Greta was an invitee to United Nations Climate Change Conference which was held in Poland. America’s Time magazine named Thunberg as one of the world’s most influential teenagers of 2018.  The latest strike was on March 15, 2019 when students from 123 countries participated. Lending their supports to the movement, Indian students from Bengaluru, Hydarabad, Mumbai, Gurgram etc protested. Significantly, she decided to continue with her protest on Fridays.  So, the movement is Fridays For Future. As the movement is gaining ground all over the world, this reporter interacted with some students to know their take on this global movement and actions needed to be done to fight climate change. Following are the excerpts:

Krishti Purna Mali, NIT, Silchar: I do support the movement as the priority of the movement is for an all-important cause- save earth for coming generation. Nobody can deny that it is a question of the very existence of the earth.  In the chaotic free planet, we create chaos by our activities without sparing a thought to the future of our home. I think everybody should do their bits.  Since we are part of the problem, we must be the part of solution to the problem. Success or failure of the movement is contingent on us. The movement, I think, will succeed in creating awareness which is a key to achieving the great goal. Once people understand and realize the woes of the earth they do play the role of responsible individual. The causes of the earth’s predicament should be explained in a simplified manner. People have felt the rise of temperature but hardly a few know that human activities like destruction of forest, burning of fossil fuels and so on are responsible.