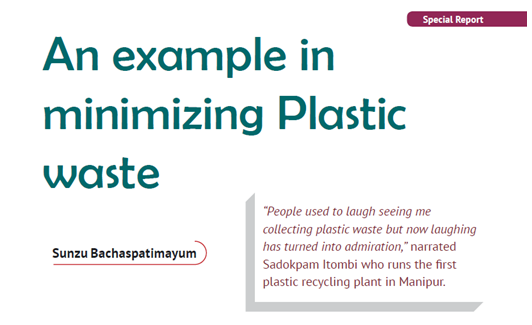 Incidentally rag pickers digging in waste dumps were the ones, who inspired Ibombi to plunge into recycling waste. He further revealed that lack of knowledge of recycling is what set the developed and the underdeveloped world apart.

“Even though, the per capita use of plastic was 109 kilo per head in develop countries like Japan as per 2015 census, there was hardly any plastic waste scattered in their rivers and their surroundings. Compared to this figure, Manipur that has a plastic usage rate of 9 kilo per head, plastic wastes are scattered everywhere,” revealed the man who is fomenting a plastic recycling revolution in the border state.

Itombi, invited each and everyone in the state to bring plastic waste to his factory in exchange for flowerpots that his recycling plant manufactures. He observed that the public invariably depends on plastic for their needs and outright neglects them, once they has been utilized not realizing that the same plastic may be recycled again and utilized again.

“Plastic has become so much a part of our lives. It is a tooth brush made of plastic that we used to brush our teeth first thing in the morning. Therefore, how to dispose plastic and recycle them are important aspects of plastic waste management. This is the only way forward and a sure mechanism to reduce scattering of plastic waste,” said the plastic recycling man.

Itombi’s recycling plant currently receives 2-3 tonnes of waste on a daily basis. The waste consists of all polyethene bags, plastic bottles, parts of electronic items and other plastic wastes. He said, he contacted rag pickers from other districts and also voluntary organisations involved in minimizing plastic waste.

He informed that different agencies dealing in rag picking delivered the waste charging of Rs.15 per kilogram and added that Churachandpur districts supplied majority of the waste. So far he receives waste from all four valley districts of Manipur and plans to cover the entire state. The waste collected are kept in the factory before workers pick the recyclable items where they are cut into pieces using machines for conversion into granules before reshaping into different product.

Itombi says politicians and the government are only good at lip service. He says, ”if we’re to minimize the plastic use, it is for each and every one of us to take responsibility to reduce plastic waste.”