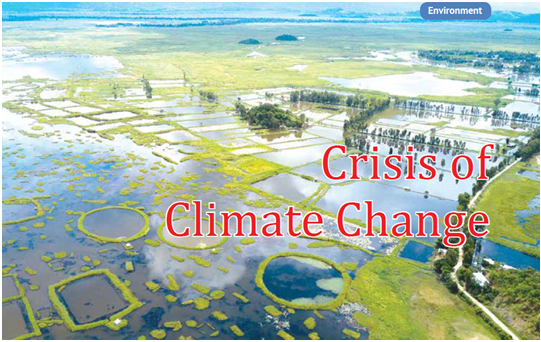 Though the impact of climate change and global warming has been acutely felt in Manipur, there have been but little action to curb the crisis.

The state has become hotter by 1oC with the result that the monsoons are erratic. It may be recalled that there was a flood in 2018. And in 2019 monsoon failed plunging the state into a drought.

The effect of the successive flood and drought is the creation of a famine-like situation. Rice sells at Rs. 50/kilogram and the scarcity of rice has led to a steep rise in the price of vegetables.

The marginalised and the poor sections of the society depend solely on the monthly quota of rice provided under National Food Security Act. But the monthly quota of 4Kg per head was not enough to meet their requirements. They have to buy the rice from the market which sells the same rice at Rs.35/- per Kg.

The BJP led govt. has declared that rice would be available at the minimum support price. However, it may take some more time to materialise the programme.

With the state becoming hotter, many diseases have broken out claiming lives.  Agriculture is adversely affected as the rains do not come at the right time. Pests and insects destroyed the plants and vegetables making it difficult for the farmers.

The Directorate of Environment and Climate change has formulated an Action plan on climate change. How far it is implemented has become a big question to many as a little concrete measure is visible which may increase in the next few months.

Migration from the rural districts to the capital city of Imphal is increasing as agriculture having failed, the villagers search for other means of livelihood. Most of them work as casual labourers.

Women and children in the rural areas are the worse affected as women take care of the family, they have to bear the brunt of the crisis. Frustrated by the failure of cross, villagers have taken to drinking and gambling. Men sitting around to gamble is a commonsight in the villages of Imphal East District.

When the monsoons failed this year, farmers desperately try to grow paddy using water pumps provided by the govt. and other social workers. Though there was success in some fields most of the paddy fields in Imphal East District, Thoubal and Bishnupur District could not grow any paddy. According to sources, 40% of the paddy fields, have failed to grow paddy.The crisis came too soon. It has been expected that rice will be there in the next year, but by September, 2019 rice has already become scarce. The local rice is not easily available and if available at a very high price.

Climate change has already unsettled the state, but little action to curb the crisis is seen. There have been no efforts to check the greenhouse gas emissions, the vehicles continue to emit carbon dioxide. The focus is on large scale tree plantation under the Green Manipur Mission.