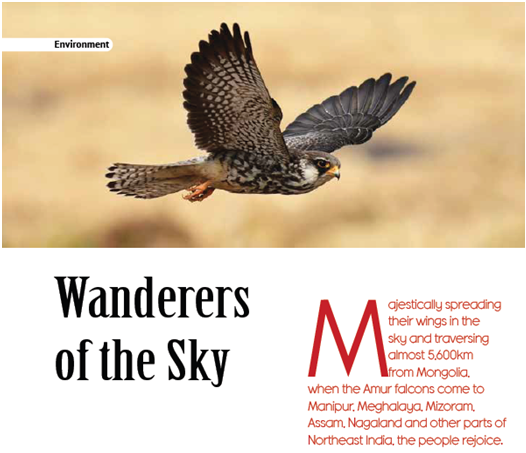 Majestically spreading their wings in the sky and traversing almost 5,600km from Mongolia, when the Amur falcons come to Manipur, Meghalaya, Mizoram, Assam, Nagaland and other parts of Northeast India, the people rejoice.

Manipur and Nagaland are particularly important as the Amur falcons mainly throng there. The villagers in the two states also consider the arrival of Amur falcons as the sign of goodwill and prosperity. Since the time immemorial, they had been coming and the people too had been rejoicing: the matter of a long tradition.

The migratory Amur falcons really behave like wanderers of the sky. The Northeast India has reasons to feel proud as when the avian creatures starts from Mongolia en route South Africa, Manipur and Nagaland becomes their first stoppage. From the two states, they again fly via Myanmar for South Africa.

The Amur falcon is the world’s longest travelling bird. These travelers of the sky make a round trip of almost 20,000km every year from Mongolia-Russia-China to South Africa.

They know their aerial route and make it an annual ritual to go to South Africa via Northeast India for warmth and hot weather in winter. They leave the snow-clad Mongolia-Russia-China during winter. The birds spend about a month in Manipur, Nagaland and other parts of Northeast India to build fat reserves.

It is really worthwhile to heap praises on the government of Manipur and Nagaland as the two states are taking most sincere efforts to save birds from hunting and also promote bird-tourism in October-November every year. The ornithologists and bird lovers from all over India come to the two states during that time.

The Amur falcon, protected under the Indian Wildlife (Protection) Act, 1972 are even provided safe resting and passage to South Africa from Northeast India. This will go a long way in conserving the migratory birds currently facing grave danger due to ecological imbalances almost all over the world.

The system of Satellite-Tagging will help the ornithologists and migratory bird conservators to gather more information on them. Their flight-data, roosting-nesting pattern and behavioural system can be obtained with the help of information received from the Satellite-Tags.

In fact, the Satellite-Tagging had a very positive impact upon the people living in the villages in Northeast India where the falcons had traditionally been coming. This enhanced the much needed awareness among the people in protecting the birds.

In 2012, the ornithologists, ecological zealots and environmentalists the world over were shocked when the news floated that the the Nagaland villagers caught hundreds of the Amur falcons for their sale and also consumption. It happened at Pangti village in Wokha district of Nagaland.

The issue created such a flutter globally that the Nagaland government swung into action to save the birds. The birds usually stay in Pangti village for about 10-15 days and fly to Somalia, Kenya and South Africa.

As the state government came down with heavy hands to forestall any such repletion, there had not been any trapping or killing of the Amur falcons after that in Nagaland. That positive step made the National Geographic announce Nagaland as one of the 10 Best Bird Destinations of the world in 2017.

Now the villagers of Pangti guard their avian guests. This is the result of the awareness programme that the state government launched to educate the villagers to the importance of Amur falcons as due to this aerial creature, Pangti occupied a space in the tourism map of India.