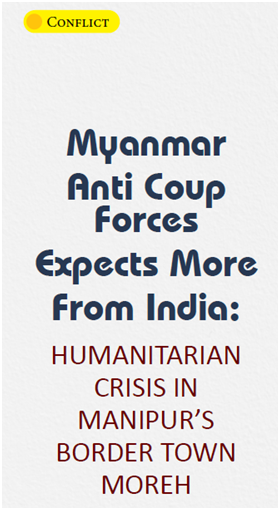 Burma (Myanmar) has been offline since 1st April, as the Junta (Burmese military) continues to crackdown on the anti-coup protesters, raising fears that the ongoing violence in the troubled southeast country, nicknamed as ‘land of Jade’ is likely to worsen.

Assistance Association for Political Prisoners (Burma), a non-profit human rights group based in Mae Sot, Thailand, reports that a total of 730 people have been killed by the Junta and 3152 detained till 17 April, since the 1 February military coup that deposed civilian government, headed by noble laureate Aung San Suu Kyi.

In Manipur, which borders Myanmar, a humanitarian crisis is brewing with the number of Myanmarese refugees surging as they continue to cross the porous border and take refuge in and around the Indian trading border town of Moreh.

Even as the government of Manipur issued directives against setting up refugee camps, local communities in Moreh are providing shelter and food to the refugees. With the Manipur Government adopting an indifference attitude to the developing situation where relief activists claimed, there are over thousand refugees holed up in border areas in and around Moreh, who have fled Myanmar fearing repression, including three journalists, the issue of food, shelter and basic amenities are becoming worry of concern.

“This is an open secret that an influx is taking place. But officially the government of Manipur is refusing to facilitate the refugees from Myanmar and also preventing the local bodies and civil societies to set up shelter camps, the fear stricken Myanmareses are being sheltered in individual homes, community halls and village offices in and around the Indian border town of Moreh,” said Ngamkholal Haokip, Secretary in-charge of Relief of the Kuki Students’ Organization (KSO, GHQ) who appeals to the government of Manipur to come out from its denial attitude on the refugee and address the situation with a system to deal with the humanitarian crisis.

While claiming, he understands the helplessness of the government of Manipur, given the central government’s directive on the issue of not providing shelter camps to the Myanmarese refugees, the KSO Secretary appreciates the stand of Manipur Government to facilitate treatment of the Myanmarese(s) who are injured in the violent crackdown going on in oup protestors are taking place. Moreh lies adjacent to Sagaing division.

Among those who received medical treatment in Imphal were Naing Naing Thu, Naing Naing Oo and Phuzo. They underwent surgeries in the abdomen, chest anTamu, in Sagaing division, where violent crackdowns on the anti-cd buttocks respectively. After their release from hospital, they were dropped off at Moreh.

According to another social activist, who did not wish to be named, among the thousand refugees in Moreh, most are women and children. The activist said, that many locals are coming forward with generous donations in cash and kind. Further, local artists are performing at road shows to raise money for food and other basic needs, she added.

Burma has a history of political and armed conflict between the repressive ruling military regime, political opponents, and ethnic groups. Flashpoints like the current situation embroiling the country, invariably result in displacement of its citizens fleeing fear of repression. India, being one of its neighbours, sharing a 1600 Km land border, is a natural choice for refuge apart from Thailand. Experts observed that systematic abuses increased after the 1988 pro-democratic uprising in Burma, adding to the sizable community of Burmese refugees in India who came into the country in the 1970s.  India currently hosts over 100,000 Burmese refugees with Mizoram and Manipur, the two North-Eastern states that share a border with Burma, sheltering the majority of them. Mizoram has 510 km of unfenced borders with Myanmar while Manipur shares 398 km.

Cut to 2021, why has India adopted a non-aligned policy towards Myanmar’s democratic forces, particularly after the February coup when it was largely seen as a staunch supporter of democracy?