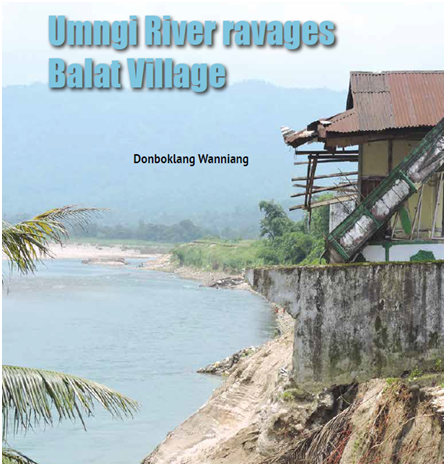 Umngi River is one of the non-polluted rivers in the District but during the monsoon, the mighty Umngi River which originates from Mawpud Village and travels to Balat village via Umpung and Umshylliah village, flow mercilessly bruising along any obstacles that come its way. Balat Market which is the life line for several villages like Umpung, Dangar, Mawpud, Umshylliah, Laitumsaw, Pynden, Umsarang, Umlynter, etc is completely on the verge of extinction from the map of Meghalaya as several Schools, Shops, and ICDS Centre located in the market area has collapsed. Extinction of this market will be detrimental for the people living in the area.

The high velocity of water has eroded the soil embankment causing damage to property along with the areas lying near the river bank at Balat village, Ranikor Community & Rural Development Block. The incessant rain has caused damages to Houses, Schools, Religious Institutions and farming land were badly affected, but due to an early warning by the Authorities, no human loss was reported. In two weeks four residential houses, one temple completely submerged, one school completely eroded, one Presbyterian Church damaged while the office of the Syiem of Maharam, two schools and an ICDS center were partially affected as per the official report of the District Disaster Management Authority, Mawkyrwat.

About 1 Km along the stretch of the River Umngi till the Balat market was found to be very vulnerable. The people residing nearby this area of the river bank are highly vulnerable since the soil along this area is not stable as it is covered mostly by loose soil. The remedial measures suggested by the team were that anti-erosion protection work is mandatory. The chainage is approximately 2-4 km along with the vulnerable areas. To prevent further aggravation of the erosion, the authority recommended the matter of the Brahmaputra Board for quick implementation of the works before further calamities can arise.

The headman of Balat K. Khardewsaw reveal that this kind of incident has started long back in 2005 after the fencing for the border road was approved. He added that with the approval for fencing people started stone and sand quarry especially in West Dong of Balat in Mawshylliah near Umpung Village. The Headman said, that this encroachment of the river is due to stone and sand quarry by few individuals Mawshylliah near Umpung Village which cause the Umngi River to divert its course to Balat village.

Headman of Balat K. Khardewsaw said that altogether 3 memorandum were submitted since 2012 by the Village Council with the latest one being on 19 July 2019 when the Minister for Water Resources Department Metbah Lyngdoh, along with Minister Social Welfare & Revenue and Disaster Management Kyrmen Shylla, Ranikor MLA Pius Marwein and Deputy Commissioner of South West Khasi Hills District Miss Isawanda Laloo IAS conducted an inspection in the region.

One resident of Umpung Village Blesterwell said that everyone in the village should be blamed for the massive erosion of Umngi River. This is because everyone in the past used to engage themselves in Stone Quarry and Sand Mining. He alleged that “villagers have cut and sold the iron net which was used for guarding the river bank”. Another resident who does not wish to be named accused the Syiem of Maharam of illegally excavating sand and stone from the river bank and sell to big factories. Maharam Chief Pa’iem Niandro Syiemiong refutes to the claims by saying that since 2005 he had gathered all Village Council and Myntri’s as ordered by the Khasi Hills Autonomous District Council (KHADC) to immediately ban all sort of quarry from the Umngi River. Pa’iem Niandro Syiemiong said that his duty is to protect the land and its people and by allowing illegal stone and sand quarry in the villages, then it’s against his duty. “As of now my duty is to relocate those affected people” he added.

Meanwhile, five safe shelters were identified, three at Brahmaputra house and one each at ICDS and RCLP. People residing along the vulnerable area were advised to be prepared in case of future rainfall and to evacuate immediately to the above-identified shelters.

Below the crooked Balat Presbytarian Church, a group of young boys and elderly women were swimming and washing clothes in the narrow Umngi river, when asked they collectively said that 3 to 4 years ago they have to walk for at least 10 minutes to reach the river bank for washing and bathing but now the river bank is just 2 to 3 minutes walking distances from their homes.

The Meghalaya Government is looking for a permanent solution by the engaging company from Bangalore Inficons to prepare a Detailed Project Report (DPR) with an estimate of 60 crores.