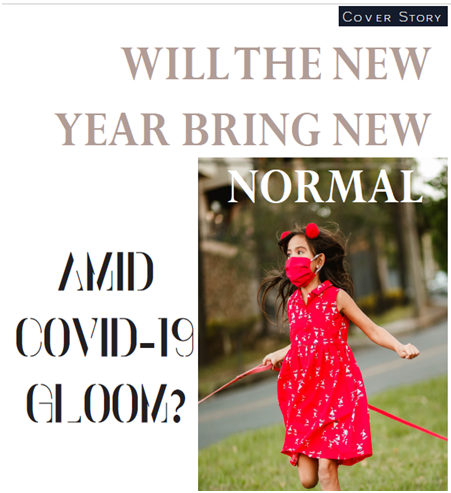 The Covid-19 pandemic has engulfed every segment of Indian society in the last seven to eight months. The insidious threat was apparent after the dreaded diseas has afflicted more than a crore of its citizens, including 1.5 lakh fatalities. Despite the government assuring the people about the availability of more than one vaccine, the announcement has not removed the fear-psychosis that has gripped the grief-stricken people. It is being learnt that a decision has been taken to vaccinate about 300 million people during the course of time. The government is also planning to accord priority to healthcare and other frontline workers, with the emphasis on people who have crossed 50 years of age, which indicates that roughly 20 per cent of the population will be vaccinated by July or August, next year.

The dangerous virus that orginated in China early this year, has led to one of the mounting challenges for healthcare experts all over the world. Covid-19 imbroglio has had a devastating effect on the economy in South Asia. A recent survey points out that India was badly mauled after the U.S. among G-20 nations. However, the country led by Narendra Modi rose to the occasion in assisting the other affected countries during the crisis, considering India’s potential as one among the leading producers of pharmaceutical drugs and vaccines in the world. It is pertinent to note that in March this year, the Prime Minister organised a special virtual summit of eight SAARC nations and sanctioned about half of the Dollar 20 million funding for timely relief. Moreover, the government had arranged for food and medicines through its ‘Vande Bharat’ Mission, apart from repatriation of non-resident Indians from neighbouring countries. A large number of people who were stranded during the lockdown were provided shelter.

China, despite its initial folly of not heeding the advice of the World Health Organisation has rectified its shortcomings by providing PPE suits and other medical assistance to the countries in South Asia.  It has also promised to ensure that the Chinese-made Sinovac vaccine was available to Nepal, Sri Lanka, Afghanistan and Pakistan sooner than later. However, what is causing an alarming concern is the emergence of mutations from countries like Australia, England, South Africa and Denmark, says sources in the medical arena. While delivering a lecture on the new English variation, WHO Chief Tedros Adhanom Ghebreyesus cited a basic fact of virology, and reasoned that viruses mutate over timed. Though, the United Kingdom reported that the transmission was higher, but the WHO dismissed it as a figment of imagination.

Sources in the medical circle assert that since the vaccines that are currently in the spotlight require two doses, the government needs to acquire 600 million doses from Serum Institute of India(SII), situated at Pune, which is the world’s largest producer of vaccines. The government has so far negotiated with the SII to procure 500 million doses of the Astrazeneca vaccine for the initial phase, and bearing this in mind, emergency requirement for this vaccine would follow soon. According to Bhaskar Dutta, Professor of Economics, Ashoka University, there are other vaccine front runners, including Bharat Biotech’s Covaxin and the Russian Sputnik V whose clinical trials in India are being conducted by Reddy’s Lab. The government should have no problems in acquiring the required number of doses, unless there is a last minute hiccup, noted the professor concerned.

The government is following the footsteps of the U.K. and the U.S in its vaccination drive. There is no iota of doubt that these two powerful nations are the maximum affected, when they failed to close down their borders after the warning over Covid-19 emanated from Taiwan initially and later from WHO.There are no two opinions over the former U.S. President Donald Trump airing his ventilated grievances towards the WHO’s blunder in the initial stages, but his indifferent attitude in curbing the vicious disease has compounded the problem of the people, not only in the U.S., but in the adjoining nations, too. This was the root cause of his defeat in the recent presidential election, despite polling 70 million votes.

The British Prime Minister Boris Johnson merely followed the dictum of Trump and had to pay the penalty for the untold sufferings of his people, similar to the former British Prime Minister Margaret Thatcher falling prey to the whims and fanices of the then U.S. President, George Bush on the Falkland War issue with the then Libya premier, Col. Gaddafi. The government led by Modi is trying to save the people who are most likely to be infected in the future, as well as those who are   vulnerable in the health consequences of the infection. Efforts were on to pay attention to the densely populated areas and slums in the country. Dharavi in Mumbai can be cited as an example. The government is trying to overcome the deleterious effect of the pandemic on the people in the long-run with the use of vaccines.

However, the government’s attempt to ignore private hospitals for distribution process could cause financial constraints to them in due course, as they would be required to bear the entire cost of vaccination. It may be noted that the government has targetted a five trillion economy by 2024, which would require a growth of nine per cent. It is imperative on the government to ensure vaccination facilities for the poor, downtrodden and the toiling masses, too. It is a welcome sign that recommendation has been made for the emergency use of Moderna vaccine across the U.S. The government is also planning a dry-run for vaccination in Assam, Gujarat, Punjab and Andhra Pradesh soon, as it will enable them to facilitate the process for the Co-WIN IT platform. The government has also taken steps to provide connectivity between planning, implementation and mechanisms, but it remains to be seen how far it would work out in a transparent manner.