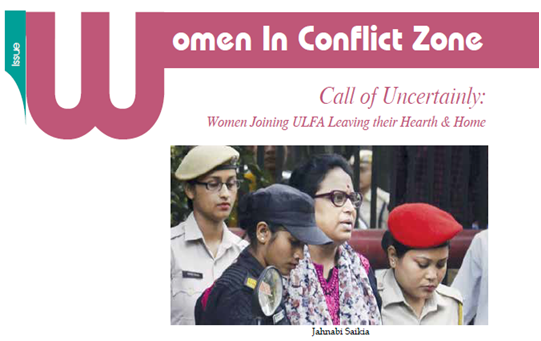 Until recently, nobody knew Jahnabi Saikia. She was just a lady next door. Today, everybody knows Jahnabi is a member of the pro-talk-ULFA group who participated in blasting grenades Guwahati.

She acted with Pranamoy Rajguru, one of the leaders of the group. The grenade blasts left eight persons injured. Though nobody was killed, the grenade blasts at a shopping mall in Guwahati, it was catapulted in the media basket nationally as it brought to the fore the involvement of women in insurgent movement in Northeast.

Jahnavi’s involvement in the grenade attack also rakes up the old issue of involvement of women in insurgency movement as a whole, be it ULFA or other armed groups in the Northeast, Liberation Tigers of Tamil Elam (LTTE) in Sri Lanka, Maoist movements in India and Nepal along the Red Corridor in India and Irish Republican Army.

Why women opt to go to conflict zones? Why they find their ways to jungles and ravines to join armed rebels? What sort of self-determination is it?

The questions are many but answers are very few. But the fact remains that when it comes to ULFA, the women played very crucial roles. After the roles that women played during the Operation Bajrang and Operation Rhino, they became extremely prized for the ULFA.

The women in militant outfits have proved what men cannot, women can. No wonder, the pro-talk ULFA, and other ULFA-factions currently are recruiting young women in large numbers. Most of them are articulate, educated, technologically well versed and having the tremendous presence of mind to outwit the security men.

On analyzing the vital roles that women played within ULFA (and all militant groups of the world as a whole), we find that they had been extraordinarily successful in giving cover to ULFA-men during armed conflicts, helping them move from one hideout to another, transporting small arms concealing in the clothes and carrying messages as couriers.

Being inborn mothers, the women also nursed the injured insurgents deep inside the jungles and could transport medicines from the cities to militant hideouts with comfortable ease. They are, in fact, the best underground workers. They are the best spies and best recruiters.

No wonder, all the factions of ULFA currently are taking the help of women in recruiting cadres. Since the 1990s, the women had been recruiting young boys and girls for ULFA and all other militant groups in remote hilly regions in Assam, Nagaland, Manipur, Arunachal Prades, and Myanmar.

In ULFA as a whole, all factions, the number of women compared to their male counterparts is far less. They usually are allotted non-combatant jobs. This may be one of the reasons for major drives by all factions of ULFA to recruit more women.

Similarly, in 2018 when Mugdha Jyoti Dev Mahanta, a female kickboxer and a student of class X, joined the Paresh Baruah-led faction of the ULFA, it too created flutters. But Mugdha’s joining at an early age clearly indicates that the ULFA-groups currently are resorting to catch-them-young modus operandi not only to wash their brains but turn them into hardened militants well versed in wielding weaponry.