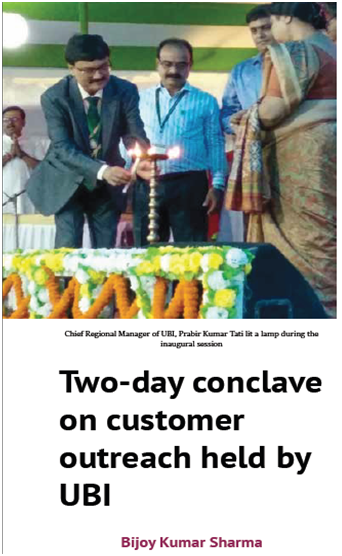 Two-day conclave of customer outreach  initiated  by United Bank of India (UBI) concludes in Dhubri with overwhelm participation and distribution of over 500 sanction letters to the beneficiaries under various government schemes. Dhubri district is one of the 400 districts across the country selected by the Ministry of Finance to hold the extensive programme to build confidence and reach out to customers and also listen to their grievances and short out them.

Speaking in the inaugural function, UBI General Manager, Rakesh Arora spoke at a length on the various loans including retail, agriculture, and MSMEs covering, housing, vehicle, personal loan, educational loan, Mudra,Stand-up, India,SVAYEM,KCC,SHG,JLG and many more being offered by various banks including UBI. He also cautioned the customers about fraudster active in mobile network and duping the innocent customers ignorant of the fraudulence activities.

While explaining the objectives of the two-day conclave, Deputy General Manager and Chief Regional Manager, Prabir Kumar Tah, in his hour long speech elaborately explained the motive and intention behind the conclave and assured customers to stand by them to simplify and hassle free disbursement of loans. Tah while strongly asserting that there is no dearth of fund in financial institutions to finance any loan also clarified on the present recession in the country, and said that this recession was a fall out of various factors which hardly affected the economy of India though little down. But it is now focusing to achieve 5 Trillion economy.

Earlier, on the day one, Dhubri District Development Commissioner, Banashree Nath formally inaugurated the two-day mega event and appealed the banks’ valued customers and loan aspirants to avail the opportunities to boost or start new trade, business and farming.

On the second day, Dhubri Deputy Commissioner, Anant Lal Gyani visited the conclave and inspected all the bank counters and talked to Deputy General Manager and Chief Regional Manager, Prabir Kumar Tah who briefed him about the programme. Talking to Associate Editor of Eastern Panorama, Bijoy Kumar Sharma, Tah said that it was their initiative that drove them to Dhubri district which one of the backward district in Assam.

Members of Parliament (MP) representing the Indigenous Tribes of the North East Region today collectively staged protest outside the Parliament to express strong opposition against the decision of the Central Government to implement Citizenship Amendment Bill (CAB).

The Members of Parliament (MP) representing the Indigenous Tribes of the North East Region also requested the Prime Minister to look into the mater seriously and address the concerns at the earliest. 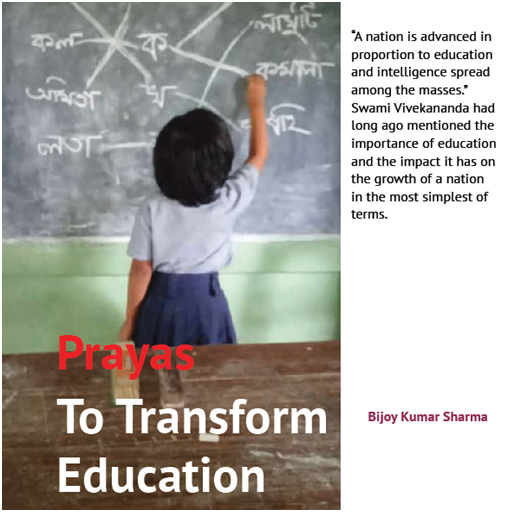 “A nation is advanced in proportion to education and intelligence spread among the masses.”
Swami Vivekananda had long ago mentioned of the very importance of education and the impact it has on the growth of a nation in the most simplest of terms.

A world that thrives on pace and selfish motives, education is what keeps the soul alive. Education not only teaches us words like “thank you” and “sorry”, but also widens our vision and understanding on gratefulness and guilt. It is not just a medium to know where the Moon is, but also about knowing, analyzing and planning on how to reach it. To say the least, education is not just a profession-building tool, it is a life-building mechanism.

Chief Minister Conrad K Sangma and Deputy Chief Minister Prestone Tynsong attended the celebration of the ‘National Milk Day’ in Shillong. The State Government has taken measures to upscale the dairy industry in Meghalaya by implementing Dairy Mission in several District of the State.

Speaking during the program Chief Minister Conrad K Sangma said that it has been an endeavor of the State Government to ensure that dairy programme of the State is intensified. “We have taken measures to upscale the dairy industry in Meghalaya and Dairy Mission is one such initiative” He added. During the celebration the Chief Minister and Deputy Chief Minister handed out prize to winners of several competition organized by the Department.

National Milk Day is celebrated across the country on 26th November every year on the birthday of Dr. Verghese Kurien. He was the father of the White Revolution in India. National Milk Day is celebrated to promote benefits related to milk and milk industry and to create awareness among people about the importance of milk and milk products. Verghese Kurien is known as the ‘Father of the White Revolution’ of India who was a social entrepreneur whose “billion-litre idea”, Operation Flood, the world’s largest agricultural dairy development programme.


We are happy to know that R.N. Ravi, Interlocutor for the Naga Peace Process and now Governor of Nagaland, have been promoted twice while serving as the Interlocutor. The NSCN-IM should also be grateful that the Framework Agreement was signed during this period.

How the Current Indo-Naga Talks Began:  Though the NSCN faced a huge setback in the 80s, twelve years after its formation, through the initiative of the organization, Nagalim was admitted in the UNPO (Unrepresented Nations and Peoples Organisation) on 23 January, 1993. This was widely published in the international media. And Nagalim was featured in the Times Magazine the same  year. (Some of the former members of the UNPO such as Armenia, East Timor, Estonia, Latvia, Georgia and Palau, have gained full independence and joined the United Nations.)