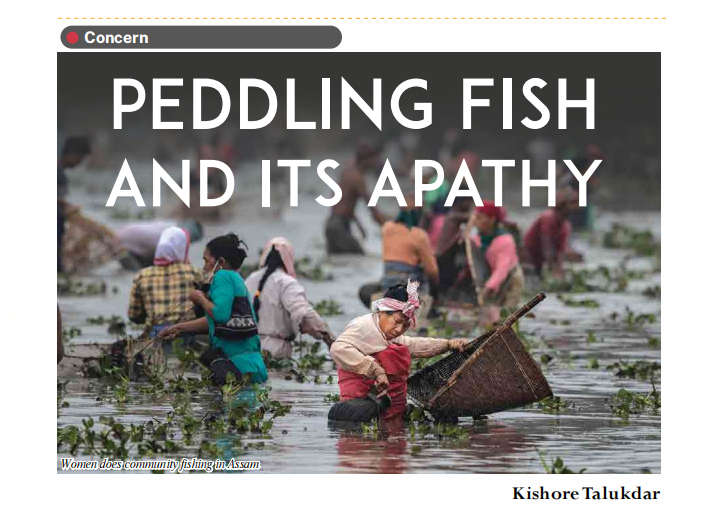 “Would you like to buy fish? Here you are”….a sentence pronounced in rural landscape in day out by swift footed women. Answer is either no thanks, or please come. Thus, women with fish filled containers in their respective neatly-combed heads are responded by the non-vegans. Locally called as pohari this particular class of women gets up with the sun; venture out for remote rural landscape to sell fishes-both large and small. With the days taking they buy the bare needs while they are on way home. The stellar economic role being played by these women of all age groups go unheeded, unreported even unrecognized. Yes, in a patriarchal society, women folk help run their poor family. It is a fish peddling venture of the fisher folk that is running smoothly for ages without being affected by modernity.

Most of the fish selling women, personify female folk pounded by poverty. They feed their family by peddling fishes in rural landscape. Anima Koiborta is one of them who and her ilk buy fishes on credit from male fisher before doing door-to-door marketing. Next day, if she fails to pay the debt, she could no longer buy fishes on credit and her family will starve. Before going to peddle fishes, they buy the commodity on credit.

“Should I fail to pay the debt next day my hope of buying fishes on credit will dash and consequently my family is resigned to starve”, Anima says. By selling fishes Anima makes paltry gain from Rs 200 to 300 in a day to somehow afford the astronomical price of essential commodities.

Sumitra Koibarta has been with the job for 30 years now who covers about 20 to 30 km everyday peddling fishes. The amount of fishes she sells fluctuate from 4 kg to 10 kg every day. However, she rues the rapid degradation of natural water bodies leading to the acute dearth of local fish species.

The fish selling womenfolk of the state play stellar economic role to run their family in penury. According to 2001 census, Assam is a home to 13,89,172 fishermen and around 46 percent are women.  While a section of women with fish filled container on their head prefer door to door peddling of fishes in rural landscape, a section of which leave for market to sell fishes.

Their condition is pathetic beyond description. Inflation hit them hard. To cap it all, children have to bear the brunt of battered economic status. Anima tells, what matters more to her is keeping her oven burning two times in a day. Two squire meals override the other importance.

Of the reportedly thirty million people working in rural parts in the world, engagement of women in fishery, forestry and livestock is 2 percent and out of the 2 percent poorest of the poor are engaged in fisheries. Though men folk are seen taking part in fish capturing operation, their female counterpart usually perform the marketing. However, there is exception in some cases where participation of female in fish catching comes to view. Community fishing is one of the glaring instances.  Marketing of fish captured by men folk in natural water areas is done two times by the womenfolk. While a section prefer house-to house peddling, some usually leave to market for sale.